A small vibrant work by Jack Butler Yeats (1871-1957) from the collection of Irish art assembled by the late businesswoman Gillian Bowler topped Adam’s sale on May 31. 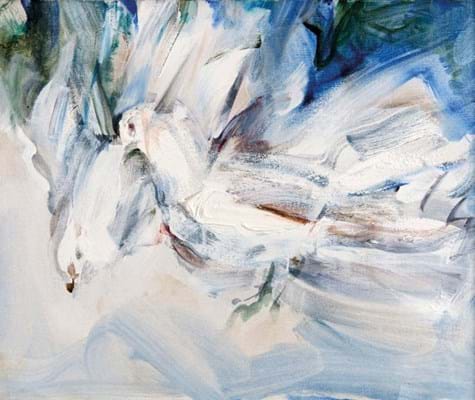 Prices for Dublin-born artist Louis le Brocquy (1916-2012) took a hammering after the economic downturn that started in 2008 but have more recently begun to recover. An example was Fan Tailed Pigeons, a 15 x 18in (38 x 6cm) oil on canvas executed in his familiar white, blue-grey palette. From the Bowler consignment, it sold just below top estimate at €58,000 (£50,400).

Another strong price was achieved for The Bath, a female nude by Patrick Collins (1911-94). The nude, set into Collins’ trademark blue-grey background, had belonged to The Dubliners’ singer, Luke Kelly, and was acquired privately by Bowler after his death in 1984.