The library of William O’Brien, an Irish-born QC and High Court judge in the Victorian era, sold for a premium-inclusive £2.8m at Sotheby’s (25/20/12.5% buyer’s premium) on June 7. 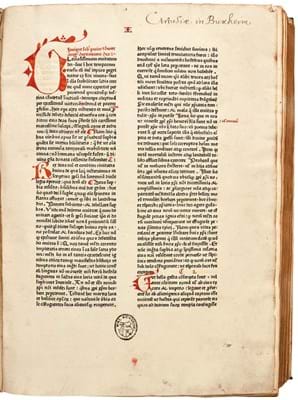 Formed largely in the later years of the 19th century – and reflecting both his own bibliographic interests and the collecting tastes of its time – the collection has been housed since O’Brien’s death in 1899 in Dublin’s Milltown Park library, a charitable trust.

The 380 lots ranged widely in age and subject matter, but there was a distinct emphasis on early printing and this O’Brien report focuses on just a few of those lots with 15th century imprints.

The most expensive, at a four-times-high-estimate £120,000, was a volume marking the first appearance in print of any of the works of Thomas Aquinas – part of his Summa theologiae.

It was printed in Strassburg no later than 1463 by Johann Mentelin, and may have been only the third work printed in that city.

Many O’Brien books were in handsome bindings of later centuries. Some may have once been in sore need of refurbishment, but others will probably have reflected the preference of many collectors of the 19th and earlier centuries to see their books in luxury bindings rather than worn but original vellum or leather covered boards.

In 1853 this Aquinas had acquired a very smart binding of crushed green morocco gilt by Duru.

The editio princeps of ‘The City of God’ is one printed in 1467 at the Benedictine monastery of Subiaco in Italy by Conrad Sweynhym & Arnold Pannartz, the German printers who set up the first press in Italy. But this Strassburg edition was the first to incorporate a commentary.

The early manuscript notes in the O’Brien copy are all additions or corrections to the text and it is quite possible, says Sotheby’s, that these were added in Mentelin’s print shop.

In an inscription on the flyleaf, the librarian of the Charterhouse of Buxheim in Bavaria records it as a donation by Hilprand Brandenburg of Biberach (1442-1512). The binding of blind-tooled pigskin over wooden boards may also have been made in Buxheim.

In 1890 O’Brien had paid £5 for a 1471, Venetian printing by Nicolas Jenson of the Commentarii of Julius Caesar – an edition preceded only by that printed two years earlier by Sweynheym & Pannartz, who by that time had moved their press to Rome.

It features the beautiful roman typeface associated with Jenson’s books and marginal decoration that may have been added at a later date, together with an unidentified coat of arms.

The elaborately gilt Neapolitan binding of tan morocco that it acquired in the early 18th century bears the arms of the 9th Duke of Maddoloni (Caserta).

This sold well at £36,000, as did another elegantly printed lot from Jenson’s workshop, an early edition of Suetonius’ Vitae XII Caesarum printed no later than the summer of 1471, that reached £35,000.

Bound in tooled olive morocco by Charles Lewis for Henry Drury of Harrow in the early 19th century, it subsequently spent time in the library of William Beckford before passing to that of Sir Edward Sullivan. The latter, a distinguished attorney general and lord chancellor of Ireland, was, like O’Brien, a Cork-born bibliophile. The two men were friends and O’Brien made many purchases when Sullivan’s collection was sold in 1890.

Among them was a 1467 (or thereabouts) printing by Ulrich Zel of Cicero’s Paradoxa Stoicorum in a 19th century binding.

Zel, a Cologne printer who had worked in Mainz with Fust & Schoeffer following their acquisition of Gutenburg’s business, specialised in small texts for students, among them numerous works by Cicero.

After the Sweynheym & Pannartz partnership in Rome ended in 1473, Arnold Pannartz continued in business on his own for some years.

Sold for £24,000 was a good copy (in 19th century navy morocco gilt by Charles Lewis) of his 1475 edition of Flavius Josephus’ De bello Judaico, edited by Bartholomaeus Platina. Once in Sir John Thorold’s Syston Park library, this was yet another book bought by O’Brien at the 1890 Sullivan sale.

A “large and crisp” copy in later vellum of Dante’s Commedia had been acquired by O’Brien from the bookseller Edward Stibbs, who had paid £11 for it at Sotheby’s at an 1884 sale of books from the library of the Duke of Hamilton.

Printed in Venice in 1477 by Wendelin da Spira, it had been preceded by half a dozen other editions, but, edited by Christofal Berardi, is the first edition to include an extensive commentary.

Brian Richardson in Print Culture in Renaissance Italy (1994) describes it as having “…marked a new approach to the presentation in print of the major literary works in the vernacular”.