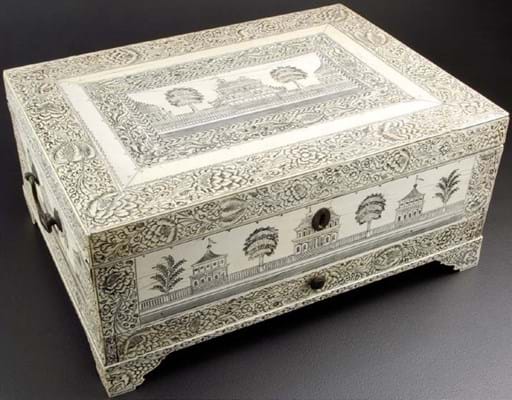 On June 27, Holloway’s of Banbury will offer a c.1810-20 Anglo-Indian Vizagapatam ivory box.

The 7½ x 17in (19 x 43cm) piece is decorated with views of pavilions and country houses flanked by trees and features broad borders of flowerheads and trailing leaves. Inside is a teak lined fitted interior with covered and open compartments above a frieze drawer.

hollowaysauctioneers.co.uk or see this item on thesaleroom.com

Holmes, a military historian, professor and magistrate on the north Hampshire Bench, had been a brigadier in the British Army’s reserve forces and colonel of his regiment.

A keen collector of both British and French military swords, his collection comprises 46 lots including this British heavy cavalry officer’s sword, c.1750-70, which is estimated at £2000-2500.

thomasdelmar.com or see this item on thesaleroom.com

A single-owner collection of pottery featuring works by a clutch of leading Japanese studio ceramicists will be offered in an online-only auction at Christie’s from June 22-29.

This large 13¼in (33cm) high ash glazed stoneware vase was made in 1968 by Tatsuzo in Mashiko, the northern Kantō region of Japan.

Estimated at $2500-3500, the oviform-shaped piece is decorated to the shoulder and to the upper section of the body with an incised L-shaped pattern and cream slip, against a mottled dark greenish-brown glaze. The mark of the potter is impressed into the base.

Sherborne saleroom Charterhouse will include this Polynesian carved hardwood club in its sale on June 22-23. Probably Tongan, the 2ft 10in long (86cm) club is carved with figures, fish, turtles, birds and zigzag carvings, terminating with a suspension loop.