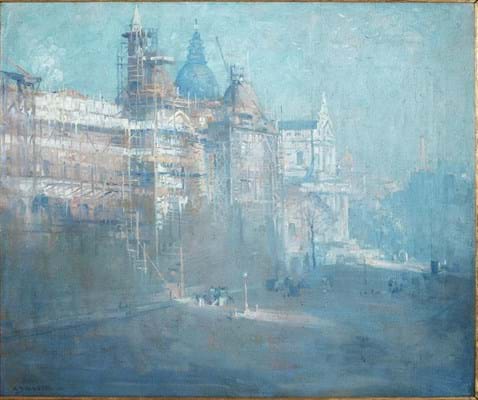 The strong performance at Bonhams (25/20/12% buyer’s premium) of a Victorian portrait by the obscure American artist Sarah Ball Dodson (1847-1906) proved there is plenty of life in 19th century pictures.

Prized above all for its elegant subject, the picture of a girl holding a bowl of butterflies sold for more than five times its top estimate at £56,000.

The price is a significant auction record for an artist who has just 10 entries in the Blouin Art Sales Index, the price database website.

“That result for me typifies the art market. It’s so image driven,” said head of sales Peter Rees, who placed it on the catalogue cover.

Dodson was recognised as one of the leading American female artists in Paris during the 1880s but a run of poor health and a relatively small output meant she has been largely overlooked since.

The new owner, a private collector in the US, was one of seven phone bidders competing for the lot.

The picture was part of a select 80- lot sale of European, Victorian and British Impressionist art held in New Bond Street on March 1. For an area that has had its lows, the results were encouraging, with £1.24m generated and three-quarters of the material getting away.

“It’s difficult to read patterns but certainly for the last three sales we’ve found that the market is buoyant if you price things correctly, particularly if they are fresh to the market and the condition is good,” said Rees. Above all, performances like the Dodson proved there is still “without question an appetite for buying in our sector”, he added.

Blue-chip artist John Singer Sargent (1856-1925) led the sale with an imposing portrait of the Irish statesman and leading advocate of his generation, Charles Russell, Baron Russell of Killowen (now in Northern Ireland). “It wasn’t a lovely society portrait of an elegant lady – it was just a fantastic bit of painting,” said Rees.

Sargent painted it in 1899, the year before Russell’s sudden death, and it was sold with correspondence between the sitter and painter. It had been in the Russell family since then.

Similar interest was also bestowed on an atmospheric London scene by Arthur Ernest Streeton (1867- 1943), one of the stars of The National Gallery’s current exhibition on Australia’s Impressionists.

Consigned from the property of ‘an important public limited company’, the 20in x 2ft (51 x 61cm) oil on canvas shows the construction of the South Kensington museum before it was renamed the Victoria & Albert Museum in 1899. It brought competition from Australian and UK bidders, selling to one of the latter for £45,000 against a £15,000-20,000 estimate.

Consigned from a private Spanish collection, the 9 x 13in (22 x 33cm) oil on board was painted in 1904 when Sorolla spent the summer painting on the El Cabanal beach in Valencia.