With BBC Radio 4 currently offering a season of programmes focusing on the Red Planet in fact and fiction, a couple of books from the Edgar Rice Burroughs series of Martian fantasies that made high prices in a recent US sale are an appropriate choice for these reports. 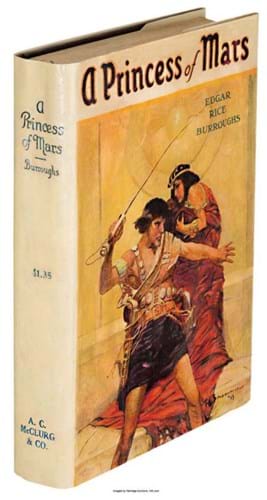 It was the Tarzan books that really made the writer’s name, but A Princess of Mars was ERB’s first published story, written in 1911 and serialised in the following year as ‘Under the Moons of Mars’ in the monthly magazine, All Story. It was there published under the pseudonym Norman Bean, though the writer had actually wanted Normal Bean!

It was a copy given six years later to his son, Hulbert, and on the front free endpaper bears the following note: “It is of course a compliment that you have had two previously autographed sets of my books stolen.

However, I hope the fiend in human form who swipes this one swallows a fish bone sideways. Lovingly, Papa…”