The inaugural Design at Home sale, put together by Mark Hill for Dawson’s (20% buyer’s premium) in Maidenhead, included a trio of pieces by ‘hot glass’ pioneer Sam Herman (b.1936). 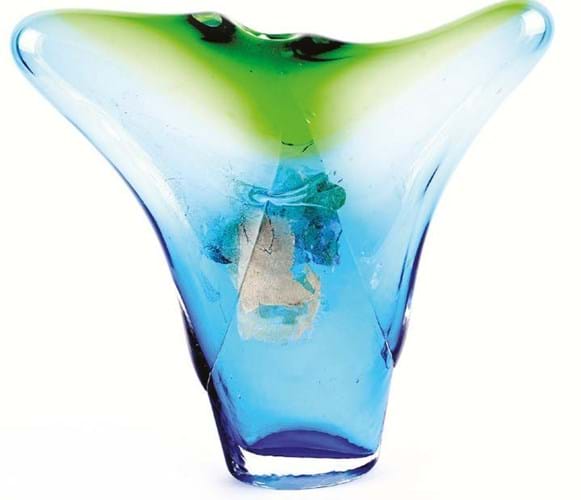 The Chelsea artist (who closed his glassmaking studio in Lots Road in 1984 to focus on painting and sculpture in other media) is among the names some observers believe could be due a reappraisal on the secondary market.

The lots offered on December 2 were from the artist’s own collection and included a 2ft 2in (65cm) high bottle from a series made c.1982 in response to his curiosity about how the glass would flow if he allowed gravity to take over. Fashioned in red and creamy brown glass with inclusions in burgundy, olive green, blue and silver chloride, it was then cased in clear glass.

Two other pieces formed part of a group of hotworked glass sculptures Herman made at Loco Glass in Gloucestershire from 2015-16. Herman estimates that from 1984-2017 he has made no more than around 90 pieces of glass, so these later creations have a rarity value.

A 16in (39cm) hot worked glass vase – a torso-like form in graduated green and blue glass with silver leaf inclusions – sold at £1800, followed at £1500 by a similar 15in (36cm) vessel trailed in blue, cream, brown and pink around internal bubbles.