An Assyrian relief unearthed from the royal palace at Nimrud in modern-day Iraq has set the second highest ever price for a piece of ancient art at auction after selling at Christie’s New York. After bringing competition from a number of interested parties, it was knocked down at $27.25m (£21.5m) – $31m including buyer’s premium. The sum was a record for an Assyrian relief and the second highest auction price for any ancient artwork – only behind the $51m (£25.9m) bid for the ‘Guennol Lioness’ at Sotheby’s New York in December 2007.

The large-scale gypsum stone relief depicting a winged deity measured over 7ft (2.13m) high and once adorned the walls of King Ashurnasirpal II’s (c.883-859BC) massive palace at Nimrud in modern-day Iraq. The royal palace was one of the largest in antiquity, underlining Ashurnasirpal’s status as the most powerful ruler of the largest empire ever seen at the time. This example showed a single figure – a ‘Winged Genius’, also known as the deity Apkallu, holding objects signifying fertility and protection for the king. The figure on the relief holds a bucket in one hand and a cone-shaped object in the other, thought to be a pine cone. Two daggers and a whetstone are tucked into fabric of the figure.

The example at Christie’s came to auction from the Virginia Theological Seminary where it had been for over 150 years, with the proceeds underwriting a scholarship fund. It was one of six frieze fragments acquired in Mosul in 1859 by the American missionary Dr Henri Byron Haskell from Sir Austen Henry Layard, the British archaeologist who excavated Nimrud.

Other Haskell pieces are now in the Bowdoin College in Maine and the Metropolitan Museum of Art. 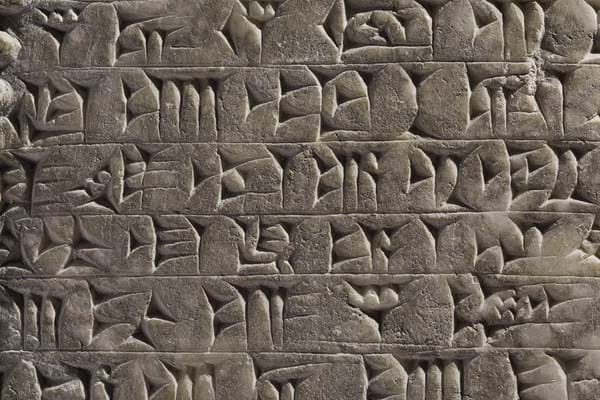 Ahead of the Christie’s sale, the Iraqi Ministry of Culture called for the repatriation of the panel. A spokesman told the Abu Dhabi-based newspaper The National that “the artefact belongs to Iraq and is under the protection of Iraqi Antiquities Law”.

Christie’s have denied that any such legal basis exists for repatriation and that the full provenance of the work, including its export into the US in 1859, meant that it met all applicable laws governing its sale. It was also stated in the auction catalogue that Layard’s excavations were approved by the Grand Vizier of the Ottoman Sultan, who gave the British archaeologist the authority to “excavate and export to your heart’s content”.

The company said in a statement: “As one of the earliest works of ancient art to enter the United States, this work well meets the applicable laws that recognise the existence of the legitimate market in such works.

“Documentation detailed in Christie’s sale catalogue clearly establishes the item’s provenance, and literature references confirm its consistent presence in Virginia from 1860 forward. In addition, Christie’s proactively contacted law enforcement to review the information prior to publication of the lot.”

$51m (£25.9m) –  the ‘Guennol Lioness’, a stone carving of a standing lioness made in Mesopotamia 5000 years ago sold at Sotheby’s New York in December 2007, smashing the auction record for any antiquity. At the time, it was also the most expensive sculpture ever sold at auction.

$27.25m (£21.5m) – the Assyrian relief from the reign of Ashurnasirpal II (c.883-859BC) sold at Christie’s New York in October 2018. The large-scale gypsum stone relief depicting a winged deity had been unearthed from the royal palace at Nimrud in modern-day Iraq during the 19th century and was sold on behalf of the Virginia Theological Seminary, where it has been since 1860.

$25m (£13.1m) – a classical Roman bronze statue of Artemis and the Stag was sold at Sotheby's New York in June 2007. Consigned by the Albright Knox Gallery in Buffalo, the 2000-year-old figure was knocked down to dealer Giuseppe Eskenazi who was bidding for a client. "Certainly one of the finest, if not the finest, bronze or any sculpture that I have seen in my 50-year career," said Eskenazi.

£14m – Egyptian Old Kingdom (c.2400-2300BC) figure of Sekhemka and his wife from the collection of Northampton museum sold at Christie’s London in July 2014.