A portrait of a young Stuart woman, below, attributed to the Hungarian painter Johannes Priwitzer (fl.1626-35), topped the picture section in a two-day sale at Cheffins (22.5% buyer’s premium) of Cambridge. 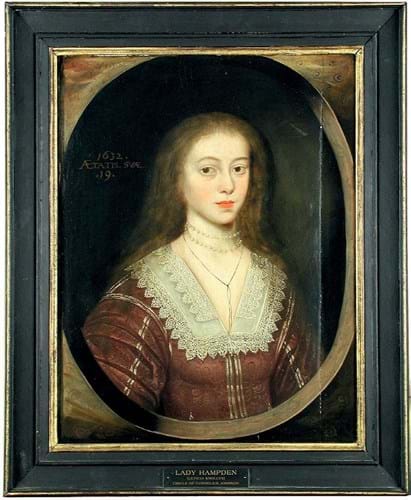 Portrait of a lady, traditionally believed to be Lettice Knollys, Lady Hampden – £6000 at Cheffins.

The sitter is believed to depict the memorably named Lettice Knollys. Not to be confused with the notorious Tudor beauty of the same name (who married the dashing Earl of Leicester much to the anger of her cousin, Queen Elizabeth I), she was the second wife of English statesman John Hampden (c.1595-1643), a relation to Oliver Cromwell and a leading Parliamentarian in the run-up to the English Civil War.

The unsigned 2ft 3in x 20½in (68 x 52cm) oil on oak panel, inscribed to the upper left 1632/Aetatis Suae/19, had passed by descent from the sitter to the Countess of Buckinghamshire at Hampden House. It descended through her family until it was acquired by the vendor at an unknown Christie’s sale some time ago.

The attribution to Priwitzer is based on the similar handling of some portraits of members of the Russell family at Woburn Abbey in Bedfordshire, one of which is signed by the artist and dated 1627.

“Certainly my favourite item in the sale, this was a particularly beautiful early portrait," said Sarah Flynn, head of the paintings department at Cheffins.

“It is a picture of a young girl with a considerable amount of charm and a very old fashioned name, all of which helped to add to its desirability.”

Despite a noticeable 3in (8cm) crack down the right-hand side of the panel, the picture sold to a private buyer in the room on top estimate at £6000 on September 12.

Galileo and the calculating countess