Silver auction previews: including a George V bowl modelled on the Winchester measure

A selection of silver lots coming up in the salerooms. This unusual George V bowl (London 2924) modelled on the Winchester measure, a set of legal standards of volume instituted in the late 15th century by Henry VII, is estimated at £700-1000 at Matthew Barton of Olympia Auctions on November 20.

This unusual George V bowl (London 2924) is modelled on the Winchester measure, a set of legal standards of volume instituted in the late 15th century by Henry VII now in the Science Museum.

Applied to the rim is the inscription Henricus Ceptimus Dei Gracia Rex Dauglae Et Francie (Henry VII King of Denmark and France) alongside traditional regal symbols of a lion rampant, an anchor, a rose and a portcullis.

Similar scaled-down replicas were made by Ramsden & Carr, Edward Barnard & Sons and Garrards, although this example carries the retailer’s mark of FJ Ross & Sons of Winchester. Weighing a hefty 76oz, it carries an estimate of £700-1000 at Matthew Barton of Olympia Auctions, west London, on November 20. 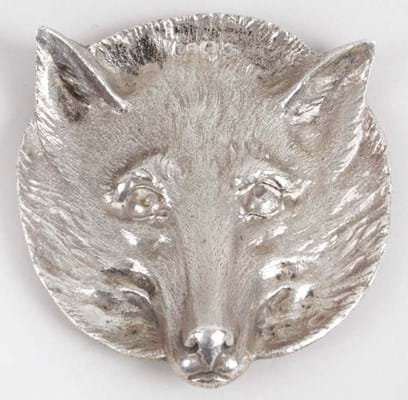 Shown above are two affordable novelty lots from Fellows’ Antiques, Silver & Collectables sale in Birmingham on September 16, both estimated at £200-300 each.

The 4in (9.5 cm) modern cast dish modelled in the form of a fox head is hallmarked for Asprey & Co, London 1966, while the mallard duck walking cane with inset glass eyes is Edwardian (London 1905).

Restoration links rack up the interest This large 23oz London-made porringer above carries the auspicious date letter for 1660-61. The year of the Restoration of Charles II, who entered London on May 29, 1660 (the month when the date letter used on London-made silver traditionally used to change), perhaps explains the unusual decoration: the body is embossed and chased with four classical portrait medallions.

The maker’s mark (IW with a tun below) is known from a number of pieces from the period including the 1655 Christopher Pym Cup, a Commonwealth livery company wine goblet made for the Worshipful Company of Blacksmiths. The estimate at Lawrences of Crewkerne on October 8 is £1200-1600. The 28oz Charles II tankard with flat hinged cover, scroll handle and shaped thumb-piece pictured above is marked for John Sutton, London 1669. With an unidentified engraved crest and the pricked initials E over WM to the handle, it carries an estimate of £5000-7000 at Mallams in Oxford on November 13. This early 17th century German silver-gilt tankard carries an estimate of £4000-6000 at Woolley & Wallis in Salisbury on October 29.

This early 17th century German silver-gilt tankard carries an estimate of £4000-6000 at Woolley & Wallis in Salisbury on October 29.

Made by Peter Wiber, Nuremberg, c.1620 (the finial is later), it is engraved with three vignettes after prints by Albrecht Dürer (1471-1528), titled Festina Lente (more haste less speed), Sic Orbis Iter (two steps forward one step back) and Sic Cedere iuvat (so give assists).

These relate to a series of 32 emblems – each allegorical of good government – that decorated the Great Hall at Nuremberg after its renovation in 1613, later engraved and published in 1617 as Emblemata Politica by Peter Iselburg (1580-1630). This pair of Victorian silver wine coolers by R&S Garrard & Co (London 1873) is engraved with the coat-of-arms of Bingham (Baron Clanmorris) of County Mayo. Estimate £3000-5000 at Ewbank’s auction on September 12.

This pair of Victorian silver wine coolers by R&S Garrard & Co (London 1873) is engraved with the coat-of-arms of Bingham (Baron Clanmorris) of County Mayo, a title created in 1800 for John Bingham whose brother Sir Henry Bingham was the ancestor of the Earls of Lucan.

Bonhams’ Important Design sale on November 27 includes The Three Graces, a suite of silver and enamelled candelabra made in 2007 by Simon Benney.

At an estimate of £250,000-300,000, this commissioned design is potentially the most valuable piece of modern contemporary design silver ever to come to auction.