No good library of British art pottery literature is complete without a copy of Paul Atterbury’s 'Moorcroft'. The jacket illustration alone with its myriad tube-lined miniatures in a bewildering range of forms and patterns is particularly memorable. More than one collector has attempted to emulate the beguiling display. Among them was the UK enthusiast who, after a 35-year collecting odyssey, closed his account to a packed room at Worcestershire auction house Kingham & Orme (20% buyer’s premium) earlier this month.

The collection, given a stand-alone catalogue that now becomes a useful reference tool, included what must be the largest selection of Moorcroft miniatures ever offered for sale – 170 of them from the William Moorcroft periods alone plus others from later factory incarnations.

The auction was preceded by a talk by art pottery guru Richard Dennis, who spoke about his long involvement with Moorcroft, initially as the dealer whose catalogue for an exhibition at the Fine Art Society in December 1973 was the first effort at a factory chronology and later as factory saviour with his wife Sally Tuffin in the 1980s.

Miniatures, Dennis recalled, had long commanded a commercial worth far outweighing their diminutive stature. Even in 1973 many of these 2½-3½in high vases, jugs and bottles were £30 each.

Forty-plus years later, the majority of lots were sold in the £150-300 range. However, some of the hard-to-find issues from the James Macintyre and the early Cobridge eras were £500-plus and a handful in a different league altogether.

When filling the gaps in a near-comprehensive display, the collector had paid as much as £5000 for a Yellow Poppy on white chalice form vase c.1904. It found a buyer here at £3400, selling to one of a handful of UK collectors who bid strongly across this section.

Collecting at this level is a near-forensic examination of pattern, ground colour and condition. With some examples offered in multiple (this was occasionally too much of a good thing), condition frequently made the difference.

Specialist George Kingham noted some buyers could turn a piece down on the basis of a frit or a bruise. There were, for example, two versions of a tiny Harebells double gourd vase c.1903, one with small imperfections selling at £800, the other at £2400. A Macintyre scent bottle is a great rarity. There were two in the sale, both from c.1904. An egg-form flask with a gilt-metal screw top decorated with Blue Poppy, perhaps the smallest piece in the auction at around 1½in (4cm) long, was pitched at £2000-2500 and knocked down at £3000. A flask and stopper decorated with Tudor Roses estimated at £1500-2000 sold at £1600. The latter represented a financial hit for the vendor: it had sold at auction in the regions for close to £5000 a decade ago.

The market has doubtless fallen a little in recent years – an estimated 25-40% according to Kingham – although the softening does depend on exactly what is for sale.

As a general rule the collecting fashion is against the two-tone ‘blue-on-blue’ wares and the white ground wares such as Persian and Pansy. Buyers are more condition conscious.

“That’s what happens when the market gets tighter,” noted Kingham. He estimated that roughly 75% of the sale sold to private collectors.

The top lot, the large Pomegranate and Poppy vase pictured on this week’s front cover, illustrated a more positive take on the market. It doubled the hammer price it had achieved in Canada in 1997, becoming one of one of the top 10 best-selling Moorcroft lots at auction.

Factory A to Z

The opening lots of the sale provided a more typical range of shapes and patterns that followed the factory history from its roots in the Art Nouveau and Arts & Crafts through the Art Deco period and towards the larger flower patterns of the post-war era.

During his pre-sale talk Dennis referenced the group of blue, pink and yellow Daisy pattern vases – a design from c.1902 that, although always popular with collectors, appears to have had a very limited run. There were five pieces here topped at £4600 (estimate £1500-2000) by a slender inverse baluster form vase decorated with blue blooms – a piece pictured in Atterbury’s factory history.

Condition was the difference between two near-identical 6in (14cm) high yellow Daisy vases that sold at £3400 (for an example in perfect condition) and £2400 (for another with a small hairline to the footrim).

The latter was additionally marked to the base Made for Pophams Plymouth, a reference to the upmarket department store that was an early provincial retailer of Moorcroft wares.

An early Florian Ware landscape vase in the blue on white Hazeldene pattern c.1903 was deemed a particularly fine example (the pattern can be subject to ‘bleeding’ in the kiln but this had been a near-perfect firing).

It sold at £3400, a similar sum to that which snared a good example of one of the next generation of landscape patterns, a large 13in (32cm) shouldered baluster Eventide vase c.1925 sold at £3600.

A rarity was a shouldered baluster-form vase in the same pattern with a sang de boeuf glaze. This so-called Red Persian vase, probably a trial piece, was estimated at £2000-2500 and pursued to £4000.

Notable too were the nine examples of the Waratah pattern – the scarce design depicting the state flower of New South Wales that was made primarily for the Australian market in the early 1930s.

Eight pieces, representing a range of different ground colours and glaze treatments, were sold including two high-temperature flambé glazed vases. A 4in (10cm) squat baluster form vase took a punchy £5000 while an 8in (21cm) waisted trumpet vase made £5800, a small hike on the £4200 it had fetched at Sotheby’s in 2002 as part of the Albert Wade collection. Another range made for the Australian export market c.1930 was the experimental Gum Tree pattern with its large blue-white eucalyptus blooms against a black ground. 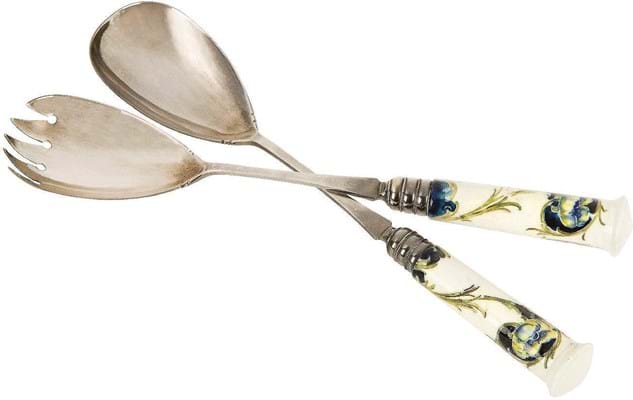