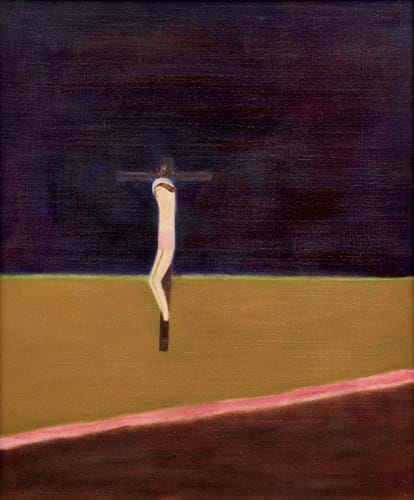 A crucifixion scene by Craigie Aitchison – £18,000 at Roseberys.

It is said that Aitchison’s fascination with it was triggered by a provocative remark made at the Slade School of Fine Art by one of his tutors, who told the young artist that is was ‘too serious a subject’ for him to attempt.

Thereafter, the crucifixion became one of his favourite and most popular subjects. Although not religious himself – “it is the art that is religious, not me”, he once said – Aitchison had always been drawn to the “bells and smells” of Catholic churches.

On the secondary market, his crucifixion scenes are highly collectable, with large-scale works regularly selling for tens of thousands at auction.

This medium-sized crucifixion scene, above, executed in the early 1970s in his distinctive simple childlike-style and bold colour, topped a sale of modern and contemporary art at south London saleroom Roseberys (25% buyer’s premium) in West Norwood on February 12.