The independent salerooms and those operating from the Drouot auction centre in Paris provide an important part of the city's Drawings Week. Around 10 sales are held at Drouot, either dedicated to works or paper or feature a substantial drawings section.

Highlights will be on show in a group preview exhibition from March 18-27. Drouot is also a partner for the 18th staging of the Dessin du Quartier Drouot held in 14 galleries that are situated in the streets around the auction centre.

Among the highlights is this 15¾ x 10½in (40 x 27cm) double-sided pen and ink drawing (above) of male nude studies by the 16th century Florentine artist Baccio Bandinelli which is estimated at €30,000-40,000. This evening sale is one of three that the auction house is mounting on March 27. It is preceded by two sculpture sales comprising some 67 lots from the collection of Fernand Lafarge and a further selection of terracottas and other sculpture from various owners. In recent years there has almost always been a representation of the quirky and distinctive (and now highly popular) watercolour bestiary produced over the course of half a century by the Austrian artist Aloys Zotl (1803-87). A mixed-discipline sale to be held by Daguerre at Drouot on March 29 features two panel paintings by Martin Drölling (1752-1817) that are of note for each being offered with a preparatory drawing.

All four works have come from the collection of Charles Lenglart 1740-1816, a banker and lace seller from Lille, and have passed down by descent.

The other same size panel, signed and dated 1808, and probably conceived as pendant work, shows what appears to be the same interior with a young woman discovering on entry to her surprise, a painting propped up on a chair. This comes with a watercolour and pen drawing of the same scene, and is guided at €40,000-60,000. 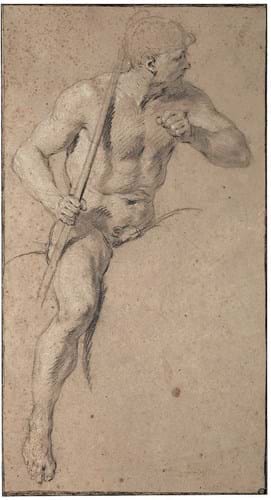 Christie’s has more than 300 lots of drawings to disperse over two days from March 27-28, in two auctions: one devoted to Old Master material, the other to modern works on paper.

Spread across both events are pieces from the collection of the Swiss bibliophile and art collector Jean Bonna which the auction house is dispersing through various sales in Paris, London and New York over the next year. Elements of his extensive collection were exhibited at the Ecole Nationale des Beaux-Arts from 2006-7 and at the Metropolitan Museum of Art in New York in 2009.

There are 34 works from Bonna’s collection included in the Old Master sale on the 27th.

Pictured above is one of Bonna’s Old Master highlights: Francois Lemoyne’s (1688-1737) pencil, chalk and stump study of a cavalryman holding a lance. The 14½ x 8in (37 x 20cm) work is a preparatory study for the standard bearer in Lemoyne’s large-scale painting of the battle scene with Tancred and Chlorinda from Tasso’s Gerusalemme Liberata now in the Musée des Beaux-Arts et d’Archéologie in Besançon. It is estimated at €70,000-100,000.

This is followed the next day by a modern works on paper sale which features another 20 items from Bonna plus works consigned by various owners. A preparatory study by Jean-Jacques Boisseau c.1670 for the ceiling decoration of the Galerie d’Apollon in the Louvre – estimated at €40,000-60,000 at Aguttes.

Aguttes is another saleroom with a dedicated works on paper sale at Drouot, on March 28.

Highlights include a collection of 50 drawings, etchings and two paintings by the French artist Jean- Jacques Boisseau (1736-1810), mostly depicting family members, which have passed down through his descendants. This is followed by Traits et Portraits, a select 22-lot event spanning four centuries of drawings devoted to the human figure and finally a larger, 110-lot, mixed-owner works on paper auction.

The final sale includes this red chalk metamorphic subject by René Magritte, Les Grâces Naturelles. The gallerist Raymonde Becquevort purchased this 18½ x 14½in (47 x 37cm) signed work directly from the artist in 1953 and it has passed down by descent to the vendor. It is estimated at €120,000-180,000.

Dealer looks back at decades trading in York's Bishy Road