For more than 25 years a regular contributor to BBC’s Antiques Roadshow, John Benjamin recalls his early days in the trade – while reviewing a recent jewellery auction. Additional reporting by Roland Arkell. Coming in the wake of 500 lots in July and over 400 lots in April, that is no small achievement.

This particular sale was notable because of the sheer range and depth of goods on offer. In many ways it reminded me of the auctions held at Phillips in the 1970s-80s: everything from attractively priced antique jewellery, diamonds and gems to 20th century and contemporary jewels and even a small section of Fabergé objets d’art.

The beating heart of the sale was a section of around 60 lots of cameo and intaglio rings which, given the current strength of the market for these small-scale hardstone studies, was timely. There were queues out of the door recently when London jeweller Wartski held an exhibition devoted to this most venerable of collecting areas.

Generally speaking, the ancient intaglios achieved the best results. A Roman nicolo onyx example probably depicting the Emperor Commodus fetched £3500 (plus 25% buyer’s premium) against an estimate of £400-600, while a 1st or 2nd century chrome chalcedony specimen of a satyr achieved well above its £3000-4000 estimate to make £7000.

The most eye-catching ring was a Roman cornelian intaglio of Mercury. The stone itself was finely carved and a particularly pretty colour, but the key aspect of this piece was its elegant late 16th or early 17th century gold ring mount decorated in black enamel in the manner of Dutch printmaker Hans van Ghemert. It was guided at a confident £8000-12,000 but soared to fetch a highly satisfactory £20,000.

Bearing in mind the fact that W&W sold a ring mounted with a Renaissance period sapphire intaglio of Julius Caesar – one of the ‘lost’ gems from the Marlborough collection – for £62,000 in April, the firm must be hoping that this positive trend is set to continue. Sapphires are found in a range of colours other than the commonly known blue and in this sale there were six examples of the yellow variety. The three best stones were roughly the same size (one weighed 20.36cts, another 22.13cts and the last 29.82cts) but achieved contrasting results.

The smallest stone was a rather pale lemony colour and, while helped by a diamond setting and Cartier box, only just scraped through to fetch £4800. The largest gem was a far better colour and mounted in a gold laurel leaf frame. However, it was a somewhat irregular ‘native-cut’, an indication of its Sri Lankan origin, and this too sold at the lower end of the estimate at £15,000.

The 22.13ct stone was not only very well cut and surrounded by diamonds but was a fantastic buttercup yellow. It was described by W&W’s young specialist Charlotte Glyde as “a little box of sunshine” – not a strict gemmological term but completely appropriate nonetheless! It attracted considerable interest on the day and finished up making a healthy £19,000. 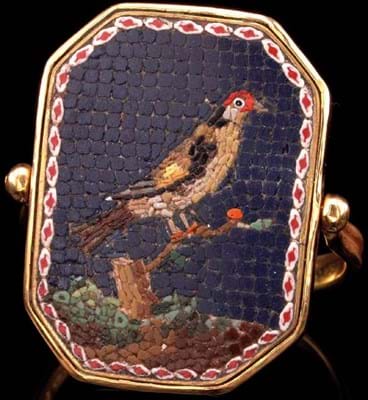 In a sale tailored to the collector, two elegant Grand Tour micromosaic rings stood out. They were almost certainly by the same craftsman.

Both were set with the smallest tesserae typical of the most accomplished late-18th century exponents of the art and exhibited commercial avian subjects. One was even double-sided, making it yet more saleable.

Nevertheless, it was the single-sided example which attracted the fiercest bidding. The reason was that it was signed on the back Giacoma Raffaelli fece 1793.

Raffaelli (1753-1836) has been described as the founding father of the early mosaicists. He started the School of Mosaics in Milan where, in 1809, he was commissioned by Napoleon to create a copy of Leonardo’s Last Supper.

The unsigned ring depicting a butterfly and a goldfinch made £4000 but the signed (and better quality) study of a dove on a branch fetched £6500. A prime example, if ever there was one, of the importance of a cast-iron attribution.