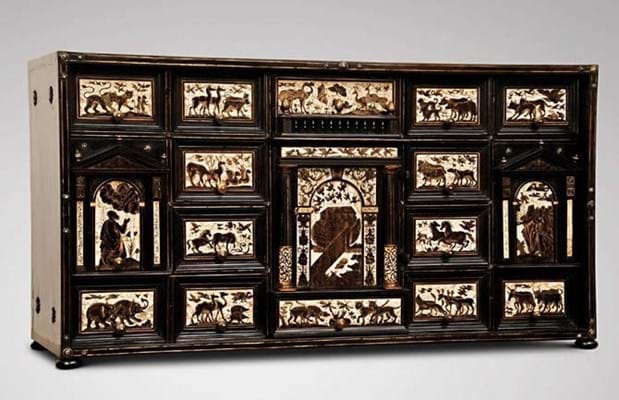 Frieze Week grew up around two major Regent’s Park fairs: Frieze Masters, where Van Haeften stood, and its Contemporary counterpart Frieze London. These coincide with PAD London, a Modern and Contemporary design event in Mayfair, and for the first time in this timeslot, British Art Fair (BAF) in Chelsea. Meanwhile, the autumn edition of the Decorative Antiques & Textiles Fair ran in Battersea.

Frieze Masters (October 3-6) kicked off with a VIP preview on October 2.

Van Haeften said: “We had a good first day and sold to new buyers, which is great.”

Other early sales included a porphyry vase, which Colnaghi, sharing a stand with Contemporary art dealer Ben Brown Fine Arts, sold to a new client who collects Modern art, for a six-figure sum.

Agnews had a stand-out first day, selling four pictures including Alphonse Mucha’s A Nude, a 2ft x 18.5in (60 x 47cm) oil on canvas, and a portrait of a young woman by William Nicholson (1872-1949) called The Yellow Jersey.

Hazlitt Holland-Hibbert also started well, selling three works from its British Pop Art exhibition. A Peter Phillips, an Allen Jones and a Peter Blake, each in the region of £100,000, went to private collections.

Another red dot went on a second edition of The Three Voyages by James Cook, including the Death of Cook plate bound in, offered by Peter Harrington. It was priced at £45,000 and snapped up by a private buyer. Further art sales took place during the opening hours of BAF, which ran from October 3-6 in the Saatchi Gallery. Waterhouse & Dodd sold several of its major works including a Peter Lanyon (1918-64), offered at £34,000, and a picture by Wilhelmina Barns- Graham, ticketed at £17,500, both to British buyers. It also sold a Paul Feiler, offered for a six-figure sum, to a US client.

A David Hockney went from the stand of Goodman Fine Art, offered for a price in the region of £85,000, and a 1986 oil on canvas by Gillian Ayres was sold by Freya Mitton.

Elsewhere at the fair, dealer Andrew Sim sold a quartet of First World War pastels, offered at £45,000, to the National Army Museum (see ATG No 2410 for more details about these pastels). This unique lamp by Paavo Tynell was offered for a price in the region of £45,000 at PAD where it was sold by Modernity.

Over at PAD (September 30-October 6) in Berkeley Square, sales included a unique ceiling lamp designed by Paavo Tynell (1890-1973) for a villa in Helsinki, which Modernity offered for a price in the region of £45,000.

Fellow exhibitor Martin Levy of H Blairman & Sons reported parting with works by Charles Robert Ashbee and Christopher Dresser. But he added: “While good business has been done by us and across the fair, there is a sense of uncertainty as a result of many external factors.”

The Battersea Decorative (October 1-6) kicked off with a flurry of good results. Hansord made one of the highlight sales: a 17th century inlaid ebony cabinet telling the story of Noah’s ark, which was offered for £12,500 and sold to a client the dealership met at the fair last year.

Dealer Nick Jones said: “I can’t remember a busier opening day. It was relentless shopping. Serious people were looking to buy, both decorators and private buyers.”