Made in Gujarat or Sindh in the 18th century, a sandalwood table cabinet profusely inlaid with ivory flowers and tendrils throughout was a fine example of Mughal craftsmanship and led the way at a recent sale at Chiswick Auctions (25% buyer’s premium). 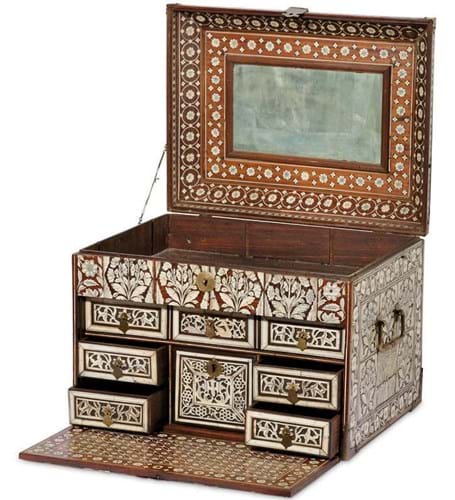 Subject to CITES, and possibly reflecting the current nervousness in the ivory market, it sold at the auction on September 26 to a London collector in the room on the lower figure.

Mughal material was also a major draw at Woolley & Wallis (25% buyer’s premium) in Salisbury on October 2.

An ebony and ivory inlaid cabinet on stand had hinged doors revealing a divided interior with a pair of mahogany drawers.

Nevertheless, it was a quality item and very attractive with the inlay of flowering plants in alternating patterns on a plain ground characteristic of the reign of Shah Jahan. Against a £3000-5000 estimate, it sold at £8800.