Maud O’Reilly (1886-1971), a key figure in Queensland’s Arts & Crafts movement and a student of the LJ Harvey school, showed her pottery at a number of British exhibitions in the mid 1920s. 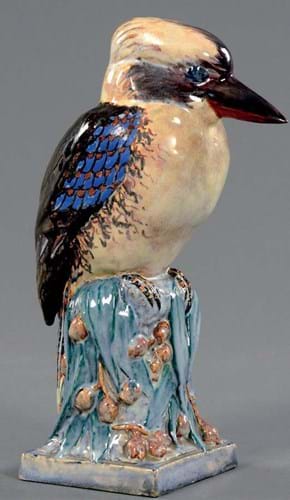 Pottery model of a kookaburra by Maud O’Reilly – £2600 at Mitchells.

In 1926 she exhibited an 11in (27cm) slip-cast figure of a kookaburra, similar to this one shown above, at The Royal Academy.

A number of versions are known including that sold by Bonhams in Sydney in 2011 for Aus$14,400 (£7323). The example pictured here, incised M O’Reilly 1926, has had some professional restoration to the beak but is in otherwise good condition.