Sixteen upcoming lots from auctions taking place around the UK and Ireland. The six-day antiquities sale at Timeline in Harwich, Essex, beginning on September 1, includes this 2¼in (5.5cm) Byzantine pendant (pictured top) made in gold set with cabochon stones including amethyst, emerald and almandine. The property of a lady from London, it was part of a Swiss family collection formed in the 1980s. Estimate £4000-6000. Attributed to Kayserzinn Jugendstil, this 5in (12cm) green glazed earthenware and pewter inkwell formed as a grotesque bird is pitched at £300-500 by Hawleys in Beverley on August 22-23. At Durrants in Beccles, Suffolk, on August 21 this late Regency mahogany framed scroll end chaise longue on brass square castors has a guide of £300-400. A large signature oil on canvas by John Bellany (1942-2013) is on offer at John Nicholson’s Fine Paintings auction on August 21.

The Venus of Seton, a colourful stylised recumbent nude among drapery reminiscent of Manet’s Olympia, measures 5ft x 5ft 8in (1.53 x 1.73m). It was a commission direct from the artist in 1990. An extensive collection of mainly small-scale action figures from the 1980s-90s being sold over two days includes this Meccano Star Wars (The Empire Strikes Back) IG-88 bounty hunter.

The 3¾in (9.5cm) figure depicts a character that appears for only a short period in the film so was not as popular as some of the others. It is on a Meccano (French release) square-shaped back card. 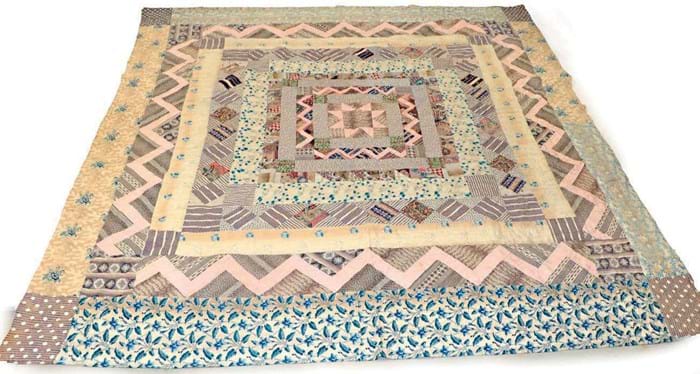 An early 19th century patchwork quilt has a guide of £150-250 at the Costume, Accessories & Textiles sale at Tennants in Leyburn on August 23. Enamel advertising sign made by the Falkirk Iron & Co, London for Brooke Bond Tea – estimate £200-300 at Roseberys London on August 22.

The Modern Home sale at Roseberys London on August 22 includes this 12 x 8in (30 x 21cm) enamel advertising sign made by the Falkirk Iron & Co, London for Brooke Bond Tea. Le Fièvre du Samedi Soir is better known as the film Saturday Night Fever, but John Travolta in that pose could never be mistaken. One of a pair of Suffragette blazer badges on offer at East Bristol Auctions on August 21 estimated at £200-300.

This is one of a pair of Suffragette blazer badges on offer at East Bristol Auctions on August 21. In addition to the slogan Votes For Women are the initials WFL for the Women’s Freedom League – an offshoot of the Women’s Social and Political Union.

The group was founded in 1907 by 77 members of the WSPU including Teresa Billington-Greig, Charlotte Despard, Alice Schofield, Edith How-Martyn and Margaret Nevinson. They disagreed with Christabel Pankhurst’s announcement that the WSPU’s annual conference was cancelled and that future decisions would be taken by a committee which she would appoint.

Offered with a personal real photographic postcard from the period showing a mixed group bathing, from the same collection as these badges, the estimate is £200-300. Further provenance is sadly unknown. A chip to this 4in (10cm) Bernard Leach jar with an impressed St Ives mark has been restored with a Japanese gold lacquer (kintsugi) repair.

It comes for sale at Ma San Auction in Bath on August 27 from the collection of the late Brian Page (1938-2018), the well-known Oriental art and antiques dealer from Brighton.

Page was a great admirer of Leach and had tea with him on more than one occasion during the 1960s. Plate from an 1821 two-volume edition of Real Life in London or The Rambles and Adventures of Bob Tallyho And his Cousin The Hon Tom Dashwood through the Metropolis which is estimated at £100-150 at Wotton Auction Rooms on August 25-26.

This plate titled Drury Lane Theatre comes from an 1821 two-volume edition of Real Life in London or The Rambles and Adventures of Bob Tallyho And his Cousin The Hon Tom Dashwood through the Metropolis.

Dated 1821, the author Pierce Egan is described here only as ’an amateur’. This tales of the rough street life in Regency London is thought to be the source of the expression Tom and Jerry, meaning fighting, drinking, and causing trouble. It is stamped twice with maker’s mark BB and twice STERLING to base.

The pot is also engraved with a crest: that of Willis of Halsnead Park and Hall-of-the-Hill, Lancashire, for Thomas Willis, a Liverpool merchant, who in 1684 purchased the estate of Halsnead. He died unmarried in 1727. The next At Home sale at Adam’s in Dublin on August 23 includes this set of four Sèvres cabinet plated variously decorated with named views.

Alongside scenes of Paris and Versailles, many of the vignettes depict London landmarks including those titled Westminster Abbaye, Trafalgar Place, The Parlement and Bank of England. This Tom Chantrell Carry on Cleo (1964) British quad design resulted in a legal case. Fox Studios claimed that it copied their Cleopatra (1963) poster (the faces of Elizabeth Taylor, Richard Burton and Rex Harrison swapped for those of the Carry On gang). Chantrell claimed that his poster was a parody and not a copy but the case was lost and this design was banned and the posters meant to be destroyed.

This example is a rare survivor – the 2ft 6in x 3ft 4in (76cm x 1.02m) poster is one of two used as an exhibit in the court case brought by 20th Century Fox against the Carry On team at Anglo Amalgamated for plagiarism. Mounted onto hardboard for the trial, it comes to auction at Ewbank’s on August 21 from the estate sale of the barrister involved. The poster has now been linen backed and restored after many years in a store cupboard. This recently refurbished reclining chair designed by Robin Day in 1952 for Hille has an estimate of £800-1200 at the Mid Century Design sale at W&H Peacock in Bedford on August 21.