A special selection of European continental porcelain coming up in UK auctions and abroad. The Rothberger family department store in the prestigious Stephansplaz was seized after the Anschluss of 1938 and Heinrich’s collection acquired by the Staatliche Kunstgewerbemuseum in Vienna after a forced sale in 1939. Twenty pieces retained after the war were finally restituted to his niece, Bertha Gutmann, in 2003. Soup plate from the so-called Wurtemberg Service given by Alexander I as a wedding gift to his sister, the Grand Duchess Catherine Pavlovna, estimate £600-1000 at Trevanion & Dean on December 5.

The December 5 sale at Trevanion & Dean in Whitchurch, Shropshire includes this soup plate from the so-called Wurtemberg Service given by Alexander I as a wedding gift to his sister, the Grand Duchess Catherine Pavlovna (1788-1819).

Made by the Imperial Porcelain Factory c.1799-1802, it is often referred to as the Wurtemburg Service due to her second marriage to Wilhelm of Wurtemberg following the death of her first husband.

Christina Trevanion found this plate (that is chipped) being used, somewhat precariously, as a bookend in a Shropshire home. The central scene is a view of Temple de la Cibelle with further architectural views painted en grisaille to the border. An old paper label fixed to the back states Specimen of St Petersburgh porcelain, Painted from Views of Italy in Medallions, Presented by the Emperor Alexander to Queen Catherine of Wurtemburg. This 19th century Paris porcelain gilt and enamelled teaset has an estimate of SFr600-800 at Schuler on December 9-11.

This 19th century Paris porcelain gilt and enamelled teaset comprising a total of 14 pieces has a guide of SFr600-800 at Schuler in Zurich on December 9-11. At London Auction on December 3 this KPM tête-à-tête has an estimate of £2000-3000. The various elements with sky blue ground feature titled scenes of German towns and castles: Schloss in Brühl and Schloss in Coblenz to the tray, Bonn and Cöln on the plates, Bingen and Nonnenwerth on the sugar bowl, Heidelberg and Rheinstien on one teacup and Ems and Promenade in Wiesbaden on the other. This Vincennes circular dish (plat d’entremets) with a bleu celeste (heavenly blue) ground from the first Louis XV service, c.1754-55, is the second Woolley & Wallis has offered this year. A total of 28 pieces of this 12½in (32cm) shape were delivered to Versailles on December 31, 1755, at a cost of 240 livres each.

Only three are known to have survived: one in the Musée des Arts Decoratifs in Paris; another (broken and repaired) was sold in Salisbury in February as part of the Judith Howard collection for £25,000; while this piece comes from a UK collection formed in the 1950s. The sale at New Orleans Auction Galleries on December 5-6 includes a large collection of the wares of the Paris porcelain factory Jacob Petit. They come for sale from the collection of Dr Ellis Ralph Lupin (1931-2014), a prominent local physician and benefactor of the New Orleans Museum of Art. He himself donated an extensive collection of Imari porcelain that is now displayed in the Lupin Wing of the museum. This 19th century Meissen cup and saucer has an estimate of £70-90 at Bishop & Miller on December 16.

This 19th century Meissen cup and saucer has a guide of £70-90 at Bishop & Miller in Stowmarket on December 16.

Both pieces are decorated to a gilt cobalt blue ground with en grisaille rococo style vignettes, the saucer depicting a mother and child gathering a bundle of straw, the cup with a panel depicting a seated lady holding a ribbon of flowers. KPM porcelain plaque painted after Friedrich Bodenmuller with Alms to the Poor, estimate £700-1000 at Cheffins on December 9-10. This Meissen part service from the 1730s is decorated with chinoiserie scenes by Johann Gregorius Höroldt (1696-1775).

In addition to the coffee pot, bowl and sugar box are an additional four teabowls with saucer, and four cups and saucers of two different profiles. It has an estimate of €30,000-45,000 at Amadeus Auktionshaus in Vienna on December 5. 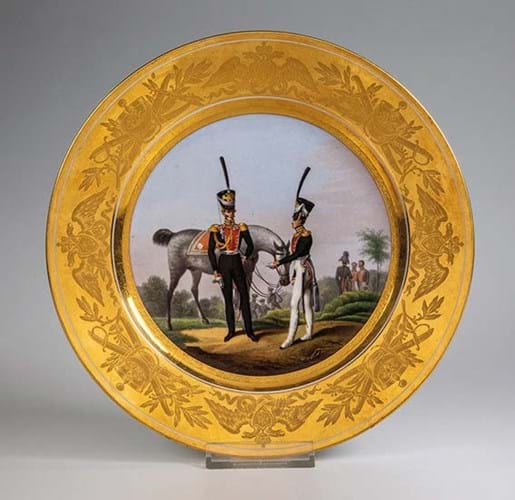 Plate from the military service made, in the wake of the Napoleonic Wars, at the Imperial Porcelain Factory, estimate €5000-6000 at Dr Fischer on December 4-5.

This plate, depicting an officer and a soldier of the Semjanovsky Life Guards, is from the military service made, in the wake of the Napoleonic Wars, at the Imperial Porcelain Factory.