The recent auction of 20th century design at Sworders (25% buyer’s premium) in Stansted Mountfitchet was underpinned by more than 60 consignments from the estate of MJ Long. 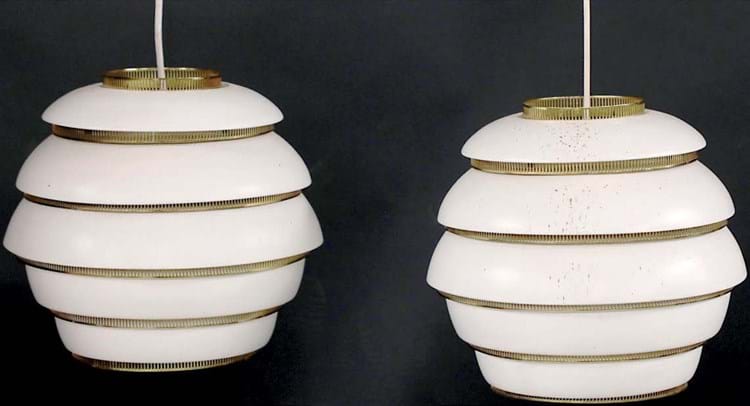 American architect Mary Jane Long (1939-2018) ran her own practice in London and, with Sir Colin ‘Sandy’ St John Wilson, was also half of the notable husband-and-wife team of architects who were the principal design partners for the British Library project.

The consignment included a wide variety of modern furniture, fine art and personal pieces from the couple’s home and their office.

From the latter came the top-seller at the auction on January 28: a pair of Alvar Aalto Beehive lamps. The 13in (32cm) diameter A331 lamps were designed in 1953 for Valaistustyö Ky and stamped accordingly. Estimated at £400-600, they sold to a Scandinavian bidder at £5000.

The couple’s admiration for Sir Eduardo Paolozzi, who would provide the bronze for the forecourt at the British Library, was reflected in a dozen offerings led by a 1960 mixed media and collage Study of a Figure (see Art Market, page 29).

Charles Rennie Mackintosh was another favoured name, albeit represented by copies made by the Anglo-Italian firm Cassina. Top piece among these was a Willow chair which more than doubled expectations at £800. Elsewhere in the 780-lot specialist sale, lighting material was again to the forefront.

Estimated at £1000-1500 was a near pair of bronze and favrile glass Art Nouveau-style lamps stamped Tiffany Studio New York and numbered 317 and 319. Alvar Aalto’s Model 31 cantilever chair is also now among the most familiar of shapes but it represented a design breakthrough when designed for a TV sanitorium in Finland in 1931. Lightweight, economical, and comfortable, it was made using laminated plywood instead of tubular steel.

In production for years, the example on offer, with a label reading Finmar Ltd Design Rec 787811-19 made in Finland, was a post-war piece. Pitched at £1500- 2000, it attracted Scandinavian interest before selling to a US bidder for £3800.

The short-lived Italian designer and artist Cesare ‘Joe’ Colombo (1930-71) was represented by an Elda black leather armchair swivelling on a white fibreglass shell, which he designed in 1963 for Comfort Italy. It doubled Sworders’ estimate at £2900.

Designed c.1960 for Bailey’s long-time associates Monteverdi-Young, it had the original label for the Los Angeles firm on the underside. It was estimated at £1000-1500 and sold at £3700.

Both pieces seem destined to be viewed at some point by a wider public than merely the designers’ aficionados – they sold as props to a film and television company.

A walnut dresser branded Lane Altavista Virginia bore the hallmarks of the US company’s mid-20th century ‘Brutalist’ line in the style of Paul Evans, with blockwork fronts to the six drawers flanking a central cupboard.