As the implementation of the Ivory Act 2018 draws closer, it is approaching closing time at the last-chance saloon for UK owners who wish to monetise Art Deco chryselephantine sculpture. Sadly, as objects less than 100 years old and including more than 10% ivory, under the provisions of the act (that survived a recent challenge at the Court of Appeal) they will no longer be legal to sell in the UK.

Auction prices have already fallen by 50% or more in anticipation that the axe will fall. However, in the knowledge that the market for the best Deco will continue to prosper in other jurisdictions, they have not disappeared from the auction room.

The three-figure group Jazz Dancers measuring 18in (45cm) across had been in the vendor’s family since its purchase new, c.1925. Signed Philippe on the arched base, it also included a foundry mark, probably for Rosenthal & Maeder of Berlin who made many of Philippe’s models.

The figure had been much admired since it came in for sale well before lockdown but given the circumstances was estimated conservatively at £3000-5000. It showed some energy is still left in the market when it sold at £21,000.

Postponed from April and repackaged as an online-only auction without public viewing, the 1500-plus lots in this auction spent well over six weeks online. Among the items attracting dozens of ‘watchers’ by the time of sale was a novelty Victorian silver-lidded decanter in the form of an owl by William Hutton (London 1893). It came in for sale via a valuation day in Northamptonshire with hopes of £1000-1500.

Hutton made a number of pieces to this model with its large paperweight glass eyes (including an inkwell and a milk jug) and offered similar vessels with the head of a cat.

They probably relate to the Edward Lear poem The Owl and the Pussycat, first published in 1871 as part of Nonsense Songs, Stories, Botany and Alphabets. In perfect condition, this decanter took £2100.

Strong interest from the US boosted bidding among the ceramics where an 11in (27cm) Mintons pâte-sur-pâte moon flask, with oval vignettes of the three graces and polychrome floral festoons, signed by Albion Birks (c.1862-1941), soared to £2800 to a US collector. Quarry pattern platter from the Durham Ox series – £500 at Hansons.

Both of these sold but at the relatively modest prices of £1050 and £500 respectively. Only the larger dish, with its design taken from an engraving of c.1802 by John Whessell after a painting by John Boultbee, had condition issues: a restored hairline and a less problematic chip to one of the feet. 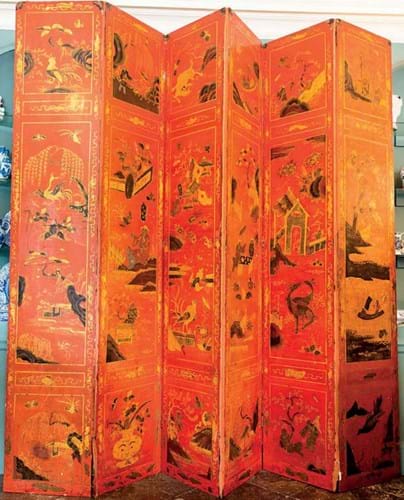 Measuring 9ft high by around 10ft across (2.75 x 3m), it is decorated with a typical display of Chinese-style landscapes, pagodas, figures and wildlife to one side in red lacquer and to the other in black.

It was offered with a copy of the June 1976 auction catalogue of the contents of Casewick in Lincolnshire, home of the Trollope family, where the screen had been purchased by a Staffordshire family.

Also chiming with today’s taste was a George III wingback chair, c.1760, with studded leather upholstery. Estimated at £300-500, a private buyer secured it for £2000. Six phone bidders competed for a 9in (22cm) high miniature tortoiseshell bracket clock (and wall bracket) made in the Georgian style but in the early years of the 20th century. Discovered in a Sutton Coldfield property in excellent condition complete with fitted oak carrying case, it went to an Australian buyer at £2600.

The books section of the sale had ended with a George Formby archive from a private collector in Norfolk.

This included a banjo ukulele that was the first of his signature instruments to appear in a film (Off the Dole, 1935) and another ukulele inscribed Use in D Low as a reminder by Formby, who didn’t read music. They made £11,000 and £10,500 respectively. Four of the 13 lots were acquired by Formby family members.