Fifteen upcoming lots from auctions taking place around the UK. 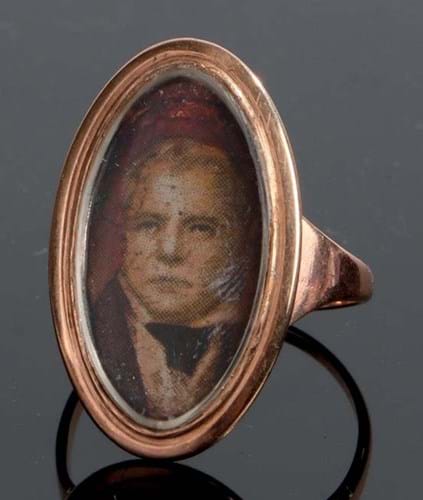 The auction calendar has been much changed by Covid 19 restrictions but with auction houses in England able to reopen premises to the public since June 15 a new normal is now set to emerge.

It will be easier for auction houses to arrange viewings as well as collection, delivery and consignments. They will need to follow government guidance on matters such as hygiene and social distancing. Some may decide to allow a number of bidders to be present in the room on auction day but it is likely that most bidding will still be taking place online via bidding platforms such as thesaleroom.com or over the phone.

Check with the auction house to understand its latest terms for storage and delivery. Remember that different devolved nations within the UK may take a different approach with regard to when auction houses can reopen premises as well as the hygiene procedures they should be following.

This 19th century ring above has a portrait miniature of Scottish novelist, poet, playwright and historian Sir Walter Scott. It has a guide of £300-500 at Bishop & Miller of Stowmarket on June 23.

It includes this mid-20th century What The Butler Saw mutoscope by Oliver Whales, c.1950. With single nude stills of two different subjects, it claims to show ‘Life like presentations from London, Paris & New York’. Jacobs & Hunt of Liss in Hampshire will offer a late Victorian ‘Jubilee’ brooch on June 19.

Worked in gold, green and white enamel and highlighted in diamonds, it comes in a box for Collingwood & Co of Conduit Street, London. It marks either the Golden Jubilee of 1887 or the Diamond Jubilee of 1897. Six rodents are found in a lavishly furnished interior, four playing cards around a pedestal table complete with a decanter and glasses and a cribbage board, one relaxing on a chaise longue, the other standing in conversation.

The diorama reputedly came into the vendor’s family in lieu of a debt owed to their grandfather in the early 20th century. It is offered with an estimate of £3500-5500. English schoolboy David Madden enjoyed an extraordinary Christmas in 1941. Recently relocated with his mother to the Bahamas as part of the CORB (Children’s Overseas Reception Board), he was invited to a children’s party at Government House, Nassau, hosted by the Duchess of Windsor, aka Wallis Simpson.

As shown in a photograph taken at the time, he was given a Louis Marx Stream Line electric train set as a gift. Still in its original cardboard box, it comes for sale with associated ephemera at Lacy Scott & Knight in Bury St Edmunds on June 27 with an estimate of £300-500. A sale of toys and models at Hansons of Etwall, Derbyshire, on June 25 includes a finely preserved Dinky Toys Gift Set No 1. The Alexandra, designed by Sir Philip Watts and named after the Queen, was laid down in A&J Ingis’ shipyard in March 1906 and launched by the Duchess of Argyll on May 30, 1907.

After the Great War it was deemed extravagant to have two royal yachts and she was laid up from 1922. In 1925 she was sold to the Norwegian firm Det Nordenfjeldske, renamed Prins Olav and began a career of Fjord pleasure cruising. However, she was caught up in the Norwegian Campaign of 1940. On June 9, while attempting to join a convoy to steam back to the UK, the yacht was sunk by German bombers.

The bell offered would have been removed at the renaming in 1925 and was discovered by a private collector, unidentified, in the cellar of a Belgian antique shop some 50 years ago. Described as ‘the property of a professional ancient art and jewellery expert’, it is probably of English manufacture and would likely have belonged to a 14th century noblewoman. This watercolour is one of three depicting scenes of colonial India offered by 1818 Auctioneers guided at £300-400 in a timed sale ending on June 28. It is written by Shepard in the guise of Winnie the Pooh and Piglet, to ‘Buffkins’ – the childhood nickname of the humanist Dr Harry Stopes-Roe (1924-2014), whose mother, the birth control pioneer Marie Stopes (1880-1958), was a close friend of the illustrator. Shepard would often attend Buffkins’ birthday parties, but when he couldn’t he would send one of these letters of apology.

The letter is being sold at Dominic Winter in South Cerney on June 24-25 by the children of Harry Stopes-Roe and his wife Mary, née Wallis (1927- 2019), herself the daughter of the illustrious scientist, engineer and inventor Sir Barnes Neville Wallis (1887-1979). Coming up in Penzance saleroom David Lay’s 300-lot auction on June 30 titled A Library of Important Books is a first-edition The Wind in the Willows by Kenneth Grahame from 1908. Signed and dated 1812, it is a typical example of Cordrey’s work. Although little is known about the man himself (based on his output, it is assumed he lived somewhere in the London region), he produced numerous depictions of horses and carriages ranging from smart society carriages to mail carriages. This Continental silver and turquoise guilloche enamel ink stand and integral desk clock, c.1920, has a guide of £300-500 at Bushey Auctions in Hertfordshire on June 18.

Eros and the grasshopper

A collection of Georgian and Victorian jewellery to remember