This portrait study is by Sybil Atteck (1911-75), a pioneering artist in Trinidad and Tobago of Chinese descent known for her work in watercolour. 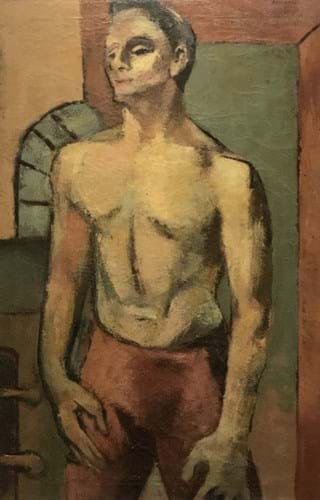 Atteck, who studied at the Regent Street Polytechnic in London, was influenced by the German Expressionist artist Max Beckmann whom she met in Peru in the late 1940s. She painted in the Expressionist style for much of her career despite criticism that it was ‘un-Trinidadian’, and influenced local artists throughout the 1950s-60s such as Carlisle Chang, Willie Chen and Leo Glasgow.

A founding member of the Trinidad and Tobago Art Society (the oldest established art organisation in the Caribbean), she is celebrated today as the country’s ‘first outstanding female painter’.

Titled The Labourer and showing a man with a naked torso, it came for sale with an old label for the Royal Society of British Artists to the verso where it was priced at 35 guineas.

A cursory internet search suggests that works by Atteck rarely appear on the secondary market. This, together with its appealing subject and provenance, helped it to £7500.