Why pocket watches sit in a tricky space in horological collecting

In contrast to the red-hot trade in vintage and modern wristwatches, the market for antique pocket watches appears very low key. However, as demand for the better-quality pieces remains robust, not all are destined for the scrapheap. Richard Fox reports “Pocket watches must have something that sets them apart to make them saleable.” In this succinct comment from dealer Daniel Somlo (Somlo London) is the essence of a 21st century collecting market.

Pocket watches sit in a tricky space in horological collecting. Thirty or 40 years ago, to be a ‘watch collector’ was to collect antique pocket watches. The history of these portable watches spans more four centuries and a timeframe that includes moments of great horological innovation and the remarkable workmanship of famed makers from the English Golden Age and beyond.

But today, completely overshadowed by the post-war wristwatch in both the market and the collecting audience, what can be said of pocket watch collecting today? In short, there is a great divide. On one side of the collecting chasm is the somewhat gloomy tale told by a single image from Brighton precious metal dealer Michael Bloomstein (above).

The truth is that, as most gold antique and vintage pocket watches have a comparatively low financial value, many are destined for the melting pot. The relatively high price of gold in recent years has meant standard Victorian and Edwardian pocket watches have been scrapped in their thousands.

Speaking in late October, Bloomstein said: “I brought in 40 gold pocket watch cases from a dealer yesterday, all for their precious metal value.”

But to consign all pocket watches to the back of the drawer, or worse, is to miss the point entirely. A far more positive view of the collecting market is seen through the lens of the smaller percentage of pocket watches that do have ‘something that sets them apart’. This means watches that are elevated above the run-of-the-mill by date, maker, case decoration, the sophistication of the movement, provenance, condition or likely a combination of these factors.

Complications, any feature of a mechanical timepiece beyond the basic display of hours, minutes and seconds, are key. Add a chronograph, an automaton, a moon phase, an alarm or a repeater and the watch begins to stand out – and tells a better story.

“With pocket watches you are looking at the genesis of horological complications now seen in high-value wristwatches today, such as the tourbillion,” says Somlo. “This is being more recognised. Some collectors who traditionally have brought very sought-after vintage wristwatches are now branching out to look at earlier horology such as pocket watches and are intrigued by them and their story.”

For certain types of pocket watches, rather than the market as a whole, specialists are seeing modest improvement in interest, demand and pricing.

David Hare at specialist auction house Gardiner Houlgate in Corsham, near Bath, notes: “There are still plenty of buyers and collectors for serious quality pocket watches. There is a good following for these. We are seeing some new buyers enter the market but not as many of the younger generations as we would like to see.

"For run-of-the-mill pocket watches the market has not generally moved on a great deal and pricing sensibly to help sell them reflects this.”

Further insight comes from horologist and watch maker Robert Loomes, of Loomes & Co based in Stamford, Lincolnshire. As well as making wristwatches, his firm restores and services pocket watches.

Encouragingly, Loomes says that his workshop is busier than ever with pocket watch restoration: “Restoration costs can be as much as - or more than - the pocket watch’s value, but it is about families cherishing and maintaining pocket watches as heirlooms. Pocket watches are massively undervalued for what you get.”

The following selection of watches explores the range of styles, periods, makers, and watch complications that can attract collector interest at a broad range of price points.

Examples of watches from both makers featured in Bonhams auctions this year. As Penny Andrews at Bonhams Knightsbridge (27.5/25/20/14.5% buyer’s premium) says: “Tompion and Graham are such star names they are always going to draw attraction. The volume of pieces by both makers still in circulation outside museums and institutions is not massive which means that there is always excitement when one comes up at auction.” Nonetheless, watches are far more affordable than other Graham and Tompion clocks. Earlier in the year at its May 18 sale a Tompion gold key wind repoussé quarter repeating pair case watch (above) took £11,000 (estimate £12,000-18,000). While the inner case was hallmarked for 1693, the dial and outer repoussé case were likely to have been added in the late 1730s to provide some rococo styling.

Made for the export market Export markets such as China and Ottoman Turkey were important for European watch and clock makers from the 17th century onwards. Typically, these watches will command a premium today on account of elaborate dial and case decoration and movements that play music or drive automata.

The firm was based in Switzerland but this duo with gold, enamel, pearl and gem-set cases are signed Jaquet Droz, London – probably because they were retailed via Jaquet Droz’s agent in London, Henry Maillardet. At the time (c.1785) items exported to the Qing court from London tended to be ‘regarded as superior quality’ and could command higher sums than those sent to the East from continental Europe.

A point of horological interest is the ‘perpétuelle’ self-winding movement that was cutting-edge technology at the time and known on only a handful of Droz watches.

Dated to c.1815, it has a musical cylinder playing on the hour or on demand and a spectacular gold, enamel and pearl-set case decorated with a neoclassical scene thought to be the crowning of Homer. Fellows sold an open face military issue by Jaeger-LeCoultre (above) on July 12 for £300.

Fellows (23% buyer’s premium) in Birmingham sold an open face military issue by Jaeger-LeCoultre (above) on July 12 for £300 against an estimate of £100-150. The nickel-plated case carries the British military broad arrow and serial numbers.

Steven Yambo at Fellows says: “This interesting watch by a good maker attracted bidders. The military pocket watch market has followed the military wristwatch market with prices increasing over recent years. It shows that current collectors are willing to bid a bit more on items that offer something away from the normal standard pocket watch.”

Speaking more broadly about the pocket watch market, Yambo adds: “The number of pocket watches consigned has remained quite consistent and stable. Basic pocket watches struggle, however, but high-quality pieces still do attract attention. Newer buyers tend to be those who have developed an interest in horology.”

Railway issues also command interest – again from a wider collecting audience. The humble Victorian silver fusee lever pocket watch, typically available for under £50, gains hugely with the addition of the name of one of Britain’s regional railways. The example here (above), in a case hallmarked for London 1870, is signed to the movement John James Tosen, South Eastern Railway, London Bridge, no.13734. It took £300 at Gardiner Houlgate (22% buyer’s premium) on October 30.

The gold full and half hunter

During the 19th and early 20th century, before the wristwatch took over, the 18ct gold full or half hunter cased pocket watch was the mainstay for a good everyday quality timepiece.

Many of these are now sold at prices that reflect bullion values but those with better quality movements or a flourish to the case decoration can still command four-figure sums. Pictured here are three examples. 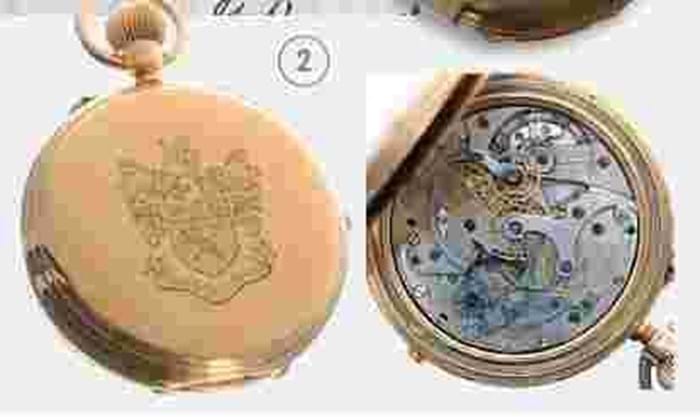 A half hunter (with the front case including a glass viewing porthole) by JW Benson, London, c.1930 – £1950 at Gardiner Houlgate.

Also with a centre seconds chronograph, a half hunter (with the front case including a glass viewing porthole) by JW Benson, London, c.1930, took £1950 at Gardiner Houlgate (22% buyer’s premium) on October 20. It came complete with a Benson warranty dated 21.6.1932.

Lyon & Turnbull’s (25% buyer’s premium) July 1 sale included a Tiffany & Co full hunter from c.1900. The movement is signed Tiffany & Co. New York and the case elaborately engraved and picked out in blue enamel. It sold at the lower end of a £2000-3000 estimate. Sarah Fergusson, head of watches at L&T, says: “Pocket watches will never be mainstream in collectability terms, but interest and value has started to move up gradually. Pieces need quality, condition, a known maker or retailer, plus a complication to stand out.” Many unsigned pocket watches have got their work cut out for them in the saleroom. A signed pocket watch provides a wealth of information about the maker or retailer not available to anonymous issues. But it is important not to dismiss unsigned watches altogether.

The question is always what, if anything, makes this watch interesting or rare?

This was certainly the case when an unsigned c.1900, 18ct full hunter pocket watch was consigned to Catherine Southon (24% buyer’s premium) from a family estate. The movement featured a minute repeater combined with very rare Westminster chimes. The pocket watch was numbered 3572 with an enamel dial, Arabic numerals, blued hands, subsidiary dial, winding crown and a repeater button.

Estimated at £700-900, the watch attracted buyer interest and eventually hammered down at £10,500 in the auction house’s Surrey sale on November 17.

The benchmark of Breguet Pocket watches from the Paris workshop of Abraham-Louis Breguet (1747-1823) are considered among the finest available. His contributions to horology include the tourbillon that allows the escapement to be placed in a revolving carriage to help compensate for positional changes of the watch.

This 18ct gold open face pocket chronometer, Breguet et Fils, No 1918, was originally sold on February 13, 1822, to Monsieur Le Comte D’Archinto for the sum of Fr4640. Christie’s said the watch is one of only seven fourminute tourbillons made by Breguet with only four of these fitted with Breguet’s own ‘echappement naturel’. The watch also features a double subsidiary seconds, power reserve, stop-seconds feature and regulator dial. A famed example is the Henry Graves Jnr ‘Super Complication’ watch made for the American banker by Patek Philippe in 1933. It has made records each time it has sold at auction, most recently by Sotheby’s Geneva in 2014 for a premiuminclusive SFr23.2m (£18.7m).

The Graves Jnr ‘Super Complication’ has a remarkable 24 complications, putting it in a league of its own for mechanical watches.

The JW Benson astronomic double-dialled navigator’s watch (above ) offered by Christie’s Geneva on November 8 had 13 complications, including a split-seconds chronograph, 24-hour world time for 63 cities, a celestial planisphere, sunrise and sunset indication and both grande and petite sonnerie striking. Another early 20th century London made watch with plenty under its case back was a Charles Frodsham, London, 18ct gold hunting cased keyless lever 7½-minute flying tourbillon pocket watch (above) with split seconds chronograph from c.1917, No 09765. The Waltham Watch Company, Massachusetts, a maker of literally millions of workaday silver pocket watches between 1850 and 1957, made only a few 19-jewel astronomic sidereal models. The example here had a damascened movement adjusted to five positions, a bi-metallic balance with overcoiled Breguet hairspring and micrometer regulator and an enamel dial with a 24-hour chapter ring and subsidiary seconds.

It dated from c.1910 and was boxed together with a Vanguard grade keyless wind watch of similar quality c.1907 with a ‘Pioneer’ case suitable for use in the field.

The matched pair in a mahogany Waltham case (above) came for sale at Rogers Jones (24% inc VAT buyer’s premium) in Cardiff on November 6 from a collection in south Wales with a guide of £2000-4000. They took £2200.