Bronze plaquette of Mars and Victory by Moderno – £6000 at Matthew Barton's sale at Olympia Auctions.

The single-owner collection of more than 200 Renaissance and later portrait medals and plaquettes offered by Matthew Barton (25% buyer’s premium) at Olympia Auctions in London on November 25 was the biggest dispersal of its type for some time.

A large part of the collection was assembled from 1911-36 by Alfred Spero (1886-1973). He was a leading dealer in works of art during the first half of the 20th century whose sources in turn had included the Melleket collection, the Henry Oppenheimer collection sold at Christie’s in 1936, the collection of V&A benefactor Dr Walter Hildburgh and that of Whitcombe Greene who bequeathed some plaquettes and many medals to the British Museum.

The vendor, Bernard Kelly, acquired the Spero collection in the late 1960s before adding to it at the Adams collection sale (Bonhams, London, 1996) and the Pope-Hennessy auction (Christie’s, New York, 1996). The word plaquette was coined by the 19th century French art historian Eugene Piot at a time when Paris was the century of the collecting market (Les Bronzes de la Renaissance. Les Plaquettes by Émile Molinier was the first large study published in 1886).

It was used to describe the small metal (typically bronze) plaques ranging from about 5-17cm across depicting religious, historical or mythological sources that enjoyed popularity, first in Italy from the 1440s and later in France, Germany and the Low Countries into the 17th century.

For the artists who made them, plaquettes were excellent calling cards, relatively cheap to produce and easily portable.

They appear to have been purely decorative, made to hang on walls, mount furniture and doors or simply to be held in the hand and admired.

Devotional images were probably often carried around in a pocket, while others with more obscure subject matter that required deep knowledge of the classics could be passed around among fellow connoisseurs. An early collector was Erasmus who acquired several in Italy in 1506-09 (they now form part of the Amerbach Kabinett at the Historisches Museum, Basel).

Among the most prolific practitioners of this small but expressive genre was Moderno (as he signed many of his works) – probably Galleazzo Mondella (1467-1528), a goldsmith from Verona working in Rome c.1500.

Some 45 different plaquettes are signed by or attributed to him and his workshop.

There were many examples here although, as the devil is so often in the detail, they made widely different sums. Dating Renaissance plaquettes is not straightforward and the quality of individual castings can vary as the moulds were used and reused far from the time and place of creation.

A series of works from the Passion Cycle sold for sums between £800 (The Resurrection) and £120 (The Flagellation) – the former a decent 16th century cast, the latter probably a 19th copy made as the genre enjoyed a collecting revival from c. 1850.

Most admired, and among the best-known Moderno works, was a 7 x 5.5cm composition of the nude figure of the winged Victory running beside helmeted Mars holding a banner. Bought by Bernard Kelly between 1967-69 for a price around £80 (the old ticket still attached), it was estimated at £600-900 but sold at £6000. Early 16th century plaquette by ‘the Master of the Labours of Hercules’ – £5800 at Matthew Barton's sale at Olympia Auctions.

A 10.5cm circular medallion showing a naked David triumphant over a headless Goliath was thought to be a workshop piece – a rarer variant of a rectangular design by Moderno – but sold well above hopes at £6000 (estimate £1000-1500).

Moderno evidently had a large workshop and many followers. Estimated at £2000-3000 but sold at £5800 was an early 16th century plaquette by a follower known as the Master of the Labours of Hercules. This 10.5 x 7.5cm plaque depicts the key moment from the 11th labour – the hero shown from the back as he lifts Antaeus in a crushing bear hug in his quest to steal three of the golden apples from the garden of the Hesperides.

This piece, housed in a later gilt bronze frame with a suspension ring, had a provenance back to 1861 when it was bought for Fr62 as part of the collection of Baron Hippolyte Boissel de Monville (1794-1863) sold at the Drouot in Paris. Here it took £5800. Most plaquettes are rectangular or circular, but other shapes are found. A 6cm shield-shaped plaque depicting Horatius Cocles defending the Pons Dublicius from the invading Etruscans was perhaps made for insertion in a sword-hilt. It sold at £4200.

The composition – one that is also known blind-stamped onto a leather binding of Aristotle’s Opera Gracce in the British Library – is by a north Italian artist active in the late 16th century known as the Master of IOFF. He may be the Bolognese goldsmith Giovanni Francesco Furnio, whose skills were celebrated in an enconium written by the humanist Giovanni Filateo Achillini. Mid-15th century bronze plaquette of the Virgin and Child after Donatello – £4200 at Matthew Barton's sale at Olympia Auctions.

Padua, an important city for metalworking during the Renaissance and Mannerist periods, was among the first centres of plaquette production.

An early example here, seen in three different mid-15th century treatments, was a plaquette of the Virgin and Child after Donatello (c.1386-1466). Two modest casts from the period made £220 each but another with a palmette and scroll surmount and the subjects framed by torchères sold at £4200. The Paduan sculptor Andrea Briosco (c.1470-1532), called Il Riccio on account of his curly hair, made a speciality of small-scale devotional bronzes.

Perhaps his best known plaquette is the 12 x 15.5cm Entombment, a composition probably taken from the monumental bronze candlestick supplied to the Basilica of St Anthony in Padua in 1516.

Two versions are known: one with an inscription on the sarcophagus thought to be the first with this second version, differing only slightly. 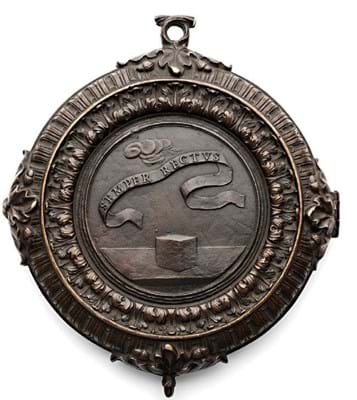 Portrait medals are a related genre and court a similar collecting audience. Unlike the plaquette, both sides of the medallion are normally decorated, with a bust likeness of contemporary rulers, dignitaries, and literary figures on one side, and symbolic imagery on the other.

Leading this group at £4800 was an elaborate medal depicting Cardinal Alfonso Litta of Milan (1608-79) that was among the last works by Italian medallist and goldsmith Gioacchino Francesco Travani (fl. 1634-75).

Litta, a Milanese nobleman who was Archbishop of Milan from 1652-79, was known for his defence of the church’s rights against lay administrations and for raising a militia of 900 armed clerics when the Duchy of Milan was threatened by invasion in 1655.

This medal was housed in a 19 x 16.5cm shaped bronze case with acanthus border that opens to reveal a dedicatory inscription dated 1675. Sold at £2400 was a 10cm bronze medal after Leone Leoni (c.1509- 90) depicting the leading Hapsburg stateman Cardinal Antoine Perrenot de Granvelle, (1517-86). Leoni was among many artists who enjoyed the patronage of perhaps the greatest private collector of his time and several medals honour him.

This example, probably from the third quarter of the 16th century, depicts him around the time he was elevated to the position of cardinal. The reverse shows an earthly paradise; a reference to Granvelle’s ambition to clean the Christian church from the recent contamination of Protestantism.

Overall, although prices from £100-1000 were the norm, a total of £124,155 was a good response for a large and mixed collection in an academic field that, at least in relative terms, is little appreciated today.

Many major museums have significant collections of plaquettes but seldom are they displayed, while in the auction room; they are far more likely appear in numismatic sales than in a works of art catalogue.

Matthew Barton said he was “gratified to see the strong level of interest” in the Kelly collection. “They are such fascinating objects and so worthy of study.”