Until its sale last year, Newbold Pacey Hall had been the seat of the Little family since the house was built by William Little in c.1780-90. 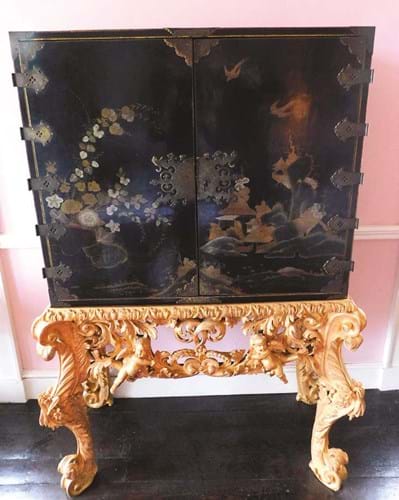 And it was the lure of market-fresh material from this Warwickshire manor that drew virtual bidders to Golding Young & Mawer (24% buyer’s premium) in Grantham on January 27-28. It was the smaller idiosyncratic items which brought the surprises. One was a collection of seven glass and unmarked gold lockets containing locks of hair and named for Edward IV, William IIII, George II, George III, Queen Charlotte, Ernest King of Hanover and The Duke of Wellington.

Samples of hair from Wars of the Roses monarch Edward IV were collected after his tomb was rediscovered in March 1789 during the restoration of St George’s Chapel, Windsor. When the lead coffin was opened, tufts of long brown hair were found near the skull, with shorter hair of the same colour on the neck of the skeleton.

The collection was offered together with an account of another royal exhumation in an overlooked vault at Windsor – that of Charles I on April 1, 1813 – as penned by the royal physician Sir Henry Halford who witnessed the occasion. Pitched at £1500-2500, it sold at £8600 to a familiar client of the firm who usually collects sculpture.

The Littles were sufficiently well connected to secure a permit admitting William to the January 1806 state funeral procession taking Lord Nelson from the Admiralty to St Paul’s Cathedral. It was the biggest such event London had seen.

A candidate for eye-catcher of the morning was a 14in (36cm) long Victorian scratch-built live-steam brass loco, probably the latest thing on the rails when made. It brought a 15-times estimate £1500 from a collector.

More comprehensively demolishing the estimate was a solitaire board with a cursory £40-60 estimate. Some 19th century rarities among its marbles attracted specialist collectors, one of whom took the board at £2000. While the £40-60 catalogue estimate on a pair of plaster figures of scholars with black basalt glaze was a printing error – they had been valued by another firm at £200 last year and auctioneer Colin Young was hoping for £200-300 – they also lit up the sale.

Standing 21in and 20in (53cm and 51cm) high, the figures, depicted in 18th century dress leaning on classical pillars, sold to a known ‘collector of unusual sculpture’ at £7500. The name Humphrey Hopper (1767-1844), a London sculpture and monumental mason of some repute in his day, has been mooted by some as explaining the interest but Young confessed: “The only thing monumental I noted was the price.” Little things – those with direct links to the house and family – meant a lot. A Regency rolled paper scroll workbox decorated with sprigs of flowers, insects and butterflies and the hinged lid bearing initial L for Little was, said Young, “my absolute favourite in the sale”.

Best of the furniture was a japanned cabinet on giltwood stand – the type of object that adorned many European country houses in the late 17th and early 18th centuries.

Decorated in gilt and silver with flowers and buildings, the cabinet enclosed a fitted interior of 12 similarly decorated drawers embellished with birds and figures. The stand was carved with putti, scrolls and flowers.

Among the most viewed lots was a 3ft 3in (1m) wide Regency gilt and ebonised console table in the manner of the influential London cabinetmaker and designer George Smith (1756-1826). With a shaped, simulated marble top, it more than quadrupled the high estimate at £3400.

A George III mahogany secretaire bookcase with an associated top tripled mid-expectations at £3200, while a pair of 6ft 10in (2.08m) wide George IV chaise longues with carved rosewood frames took £3600 against a £1500-2500 estimate. All went to private buyers.

Topping the horology was a George III longcase signed Barraud, Cornhill, London. With an eight-day fourpillar movement, in a (2.15m) tall mahogany case with arched hood, it was pitched at £1500-2000 and went to a West Country clocks dealer at £6500. A lot catalogued as a 17th century Venetian campana-shaped flask was more probably a Mughal hookah pipe base (some were imported from Venice, others made in Bihar).

The 6½in (17cm) tall vessel featured flower heads in hexagonal reserves and scrolling bands created by applying metal beads. It was estimated at £300-500 but sold to a London specialist at £6000. Top-sellers among the contents of Newbold Pacey Hall were two Grand Tour oils on canvas by Jacob More (1740-93). Born in Edinburgh, More moved to Rome in 1773 and lived there for the rest of his life, painting landscapes such as The Falls of Tivoli and The Roman Campagna.

Pitched at £20,000-30,000, each sold to the same London dealer a fraction under hopes. The Falls of Tivoli, pictured above, with figures of a fisherman, his companion and a dog in the foreground, took £19,500. The Roman Campagna, with cattle and figures in foreground, took £19,000.