Our regular selection of previews from UK and Irish salerooms. Two 19th century albums of photographic cartes de visite come for sale at Bearnes Hampton & Littlewood in Exeter on January 25 (pictured top). Members of the British and European royal families, novelists, politicians, US presidents are among the sitters together with cards for a number of people connected with Exeter Cathedral (including the high churchman bishop Henry Phillpotts,1778-1869).

The photographs were collected in the 1860s by a Miss Harington, the sister of Rev Edward Charles Harington (1804-81) who was chancellor and sub dean at Exeter. Estimate £400-600. 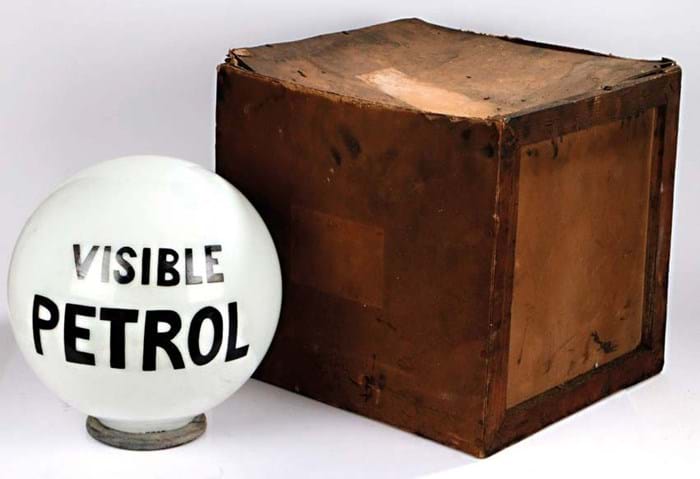 A 1920s Chance Brothers glass globe together with the box and packing it was delivered in, estimate £800-1200 at Bishop & Miller on January 20.

The sale at Bishop & Miller in Stowmarket on January 20 titled Dr Atomica’s Journey into Cool includes this remarkable survivor: a 1920s Chance Brothers glass globe together with the box and packing it was delivered in.

The vendor believes this globe with the lettering Visible Petrol has never been used. Sworders’ sale on January 26 includes a Robert ‘Mouseman’ Thompson oak dining table and six dining chairs with a provenance to the estate sale of Peter James Cunliffe Horlick, 3rd Bt, estimate £6000-8000 for the chairs and the same for the table.

The table is offered on its own and the chairs together as a single lot, each estimated at £6000-8000.

Thompson provided office furniture for the Horlicks factory in Slough in three batches (1930, 1936 and 1938) plus additional pieces for family members.

In October 2018 Sworders sold a 47-lot collection of Mouseman furniture from the Horlicks collection for £236,000. It was consigned by British pharmaceutical company GlaxoSmithKline as the Slough factory was sold and the Horlicks brand itself put up for sale. Paul Sandby pen, ink and watercolour of The Mall, Chiswick, estimate £1500-2000 at Mallams Cheltenham on January 21.

The sale at Mallams in Cheltenham on January 21 includes items from Long Court, Randwick, in Gloucestershire.

The pieces were previously owned by Captain Richard Ford (1860-1940) of Ennismere Gardens, London, who inherited a large art collection from his father in 1917. His handwritten inventory matches many of the lots that were bequeathed to his sons at Long Court.

Brinsley Ford (1908-99), the eminent historian, added extensively to his inheritance and built up the collection that featured a Michelangelo study which was sold by his estate for $12m in 2000. The January 19-20 sale at Chorley’s in Prinknash Abbey, Gloucestershire, features one of the earliest books to promote free emigration to an Australian colony.

Godwin’s Emigrant’s Guide to Van Diemen’s Land was first published in 1823 by Thomas Godwin, providing information regarding the climate, soil types, habitat and available land in what would become Tasmania. This second edition of 1841 has an estimate of £2000-3000. On January 18 Wotton Auction Rooms in Gloucestershire will sell a large collection of antique dolls. This 20in (49cm) Jumeau bisque socket head doll with jointed composition body is marked to the back of the head in red Depose Tete Jumeau Bte SGDG 8 Hlll. Wearing period clothes and shoes, she is guided at £400-600. The silver sale at Woolley & Wallis in Salisbury (postponed until late February) includes a fine private collection of early silver, much of it acquired through dealer Alastair Dickenson.

This William and Mary provincial silver tankard by Timothy or John Smith of York, 1691, is engraved with the arms of the Worshipful Company of Drapers and inscribed The Gift of Timothy Williamson and John Hartloy and (by different hand) To TI.

TI is thought to be Thomas Jackson, a merchant tailor made free in 1655 who was Chamberlain of York in 1665.