In a market challenged by a lack of fresh consignments, works new to the saleroom stand out Plenty of auction action came in Germany at the end of 2020 including sales that are traditionally a feature of the last months of the year such as Asian Art and Old Masters.

The Old Masters achieved some of the highest results at German auctions in November and December, not only at the sale of the Bischoff Collection in Cologne (ATG No 2472). If rarity and provenance were right, and in particular if the work of art was fresh to the market, dealers and collectors from home and abroad were willing to go way over the odds.

The 2ft x 3ft 9in (60cm x 1.14m) panel Die Plünderung nach der Schlacht (The Looting after the Battle) by Sebastian Vrancx (previewed in ATG No 2466) was the biggest attraction at Karl & Faber (25% buyer’s premium) in Munich on November 14.

The painting had been in a north German collection for over half a century and went to an international buyer, one of five phone bidders, for €85,000 (£77,270), doubling the estimate in the process.

Although the Portrait of a Gentleman, a 2ft 2in x 20in (64 x 50cm) canvas, was dated Ano 1598 and bore the signature Heintz F, Munich auction house Scheublein (26% buyer’s premium) was cautious in its attribution to Joseph Heintz the Elder.

The artist, who was renowned for his portraits and religious scenes, was born in Switzerland, travelled extensively in Italy and spent several years working at the court of the Emperor Rudolf II in Prague, where he died in 1609.

The catalogue for the sale on November 27 gave no indication of provenance and the estimate was set at a modest €3000. However, several bidders were intent on claiming it for themselves. An international dealer proved to be the most determined, securing the portrait for €45,000 (£40,910).

The next opportunity for Old Master aficionados was the sale held by Spik (20% buyer’s premium) in Berlin on December 3-5. A late 15th century portable triptych by the Spanish artist Fernando Gallego was the star lot. The triptych, 2ft 2in x 3ft (67 x 91cm) when opened, was painted in semi-grisaille with occasional touches of colour and gold paint. The central panel depicted the Madonna of Humility, flanked by the saints Andrew and Eustace on the one side and John the Baptist and Catherine on the other.

Very little is known about Gallego, who primarily worked in Salamanca and the surrounding area.

Most of the few surviving works are in museums and accordingly they very rarely make it to the market. This painting had been in the possession of a Berlin family since the 1950s.

In the 1660s, when he was in his 20s, the promising artist Gérard de Lairesse had sat for his famous colleague Rembrandt.

The resulting portrait now belongs to the Metropolitan Museum of Art and the depiction is taken as a convincing indication that Lairesse was suffering from congenital syphilis. In 1689, when he was 50, the illness caused him to go blind, putting an end to his active painting career.

At about the time he was portrayed by Rembrandt, Lairesse was working on a series of six paintings depicting the infancy of Christ. Towards the end of the 18th century, they are known to have been in the collegiate church of Notre Dame in Huy, about 20 miles south-west of Liège. 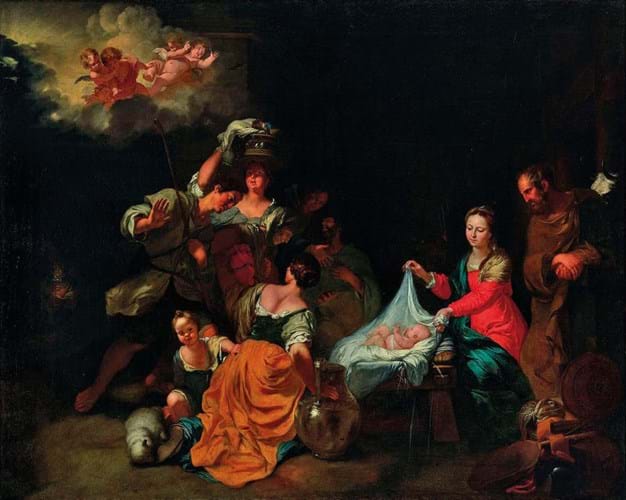 Several contenders gave the successful buyer a good run for their money. The new owner is the Fondation Vandervelden in Liège, which had a good reason to pay a price of €165,000 (£150,000): the other five paintings from the cycle are already in its possession.

A week later, the centre of attention was Stuttgart.

The Viennese artist Johann Georg Platzer was renowned for his exquisitely executed paintings of mythological scenes and episodes from classical antiquity. His favoured medium was copper, which enabled him to preserve the lucidity of the colours he used, often achieving the effect of an enamelled surface. The subject was inspired by an episode in Plutarch’s Life of Demetrius. Antiochus was madly, but secretly, in love with Stratonice, the second wife of his father, King Seleucus. This hidden passion caused Antiochus to fall mortally ill.

However, a doctor noticed that the presence of Stratonice seemed to revive him. The doctor informed Seleucus, who selflessly renounced his young wife and offered her to his son.

This legend of love and parental affection has obviously lost none of its attraction – in the Stuttgart auction a German collector was taken to €230,000 (£209,100) before he could outpace his many international competitors.