The Pedestal holds a Fine Interiors sale from The Dairy, Stonor Park, Henley, on February 9.

This auction includes a William IV Tunbridgeware rosewood and specimen marquetry central table (pictured top) by John Talbot Ubsdell of Tunbridge Wells that comes for sale from a Berkshire home with a guide of £1000-1500.

It is labelled to the underside Manufactured by IT Ubsdell, late Fenner & Co, Tunbridge Wells. This 7in (18cm) Poole vase from the post-war Contemporary range was made to mark the 1953 Coronation. The inscription to the base describes it as number 14 of an edition of 25 designed by Alfred Read and painted by Ruth Pavely. The estimate is £60-100 at Gardiner Houlgate in Horsham, Bath on February 11. 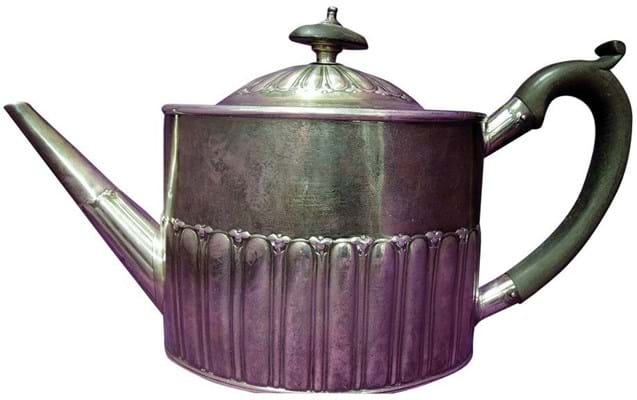 This silver teapot has London hallmarks for 1792 and a maker’s mark for silversmith Michael Plummer who worked out of Gutter Lane, London between 1791-95.

However, of equal importance is an inscription (also shown above) to the base dated July 1898 that states it belonged to Elizabeth ‘Bessie’ Allen, wife of Josiah Wedgwood II (the son of the English potter Josiah Wedgwood), and was later owned by their daughter Emma Wedgwood, who married her first cousin Charles Darwin. Their son Leonard Darwin appears to have commissioned the inscription. A George III mahogany bureau with a tambour top, estimate £300-500 at Locke & England on January 28. This rare 1774 Irish proof or pattern halfpenny was bought for the equivalent of $2 many years ago. The ‘extremely fine’ copper coin portrays George III with long hair, with a harp on the reverse.

From the collection of the well-known US numismatist Eric Newman (1911-2017), it will be offered in a live online auction of Coins and Historical Medals at London saleroom Dix Noonan Webb on February 2 estimated at £2400-3000. This 8in (20cm) Moorcroft Macintyre Florianware twin-handled vase decorated in the blue Poppy pattern, c.1900-02, is estimated to bring £500-800 at Greenslade Taylor Hunt in Taunton on January 28. It promotes a performance that took place on December, 11, 1934 at the Salle Rameau in Lyon. Jacques Canetti invited Armstrong to France and put together a new orchestra, with Herman Chitison on the piano, and some of the best elements from the ex-Freddy Johnson ensemble. They performed mostly in Paris but also gave concerts at Palais des Fetes in Strasbourg, the Cinema Odeon in Marseille and Lyon. A sale at Stamford Auction Rooms on January 30 includes this 10in (25cm) wide Victorian majolica inkstand expected to bring £200-400. The two inkwells with original covers are modelled with rams heads and floral swags. Cast of The Slingboy or The Catapult by Sir William Reid Dick - estimate £3000-5000 at Batemans on February 6. This Black Forest-type carved wood chair with full bear backrest and legs with bear cub details is part of a recent estate clearance in Stafford. William George conducts an online sale closing on January 31 with the opening bid set at £1000. Works by TV artist and presenter Tony Hart (1925-2009) come to auction at Ewbank’s in Surrey on January 29. The 55-lot sale comprises items consigned from the collection of Hart’s close friend and agent Roc Renals (1922-2014).

The auction includes artwork and correspondence spanning the Vision On and Take Hart presenter’s career from the 1950s onwards, including ink and watercolour views of the Montserrat home and AIR studio of Renals’ friend, Beatles producer George Martin, not long before they were destroyed in a 1989 hurricane.

Hart’s earliest TV artwork (above), created on commission for a 1952 BBC programme called Saturday Special, reveals his original inspiration for the Blue Peter ship, six years before the children’s TV show launched. It is estimated at £800-1200. The estimate for this Edward VII Coronation 13-coin specimen set offered by Wilson55 (the new name for Peter Wilson) in Nantwich on February 4 is £3000-5000. British quad poster for Some Like it Hot – estimate £350-550 in an online sale by BTW Auctions ending on February 7.

An online sale conducted by BTW Auctions in West Bromwich includes this British quad poster for Some Like it Hot, the 1961 film starring Marilyn Monroe, Tony Curtis and Jack Lemmon. When the sale closes on February 7 bidding is expected to reach £350-550. A run of copies of artist Robert Ladbrooke’s Views of the Churches in Norfolk…Illustrative of Blomefield’s History of That County published between 1821-32 – estimate £100-200 at TW Gaze on February 11.

A Books, Maps & Ephemera sale at TW Gaze in Diss on February 11 includes a run of copies of artist Robert Ladbrooke’s Views of the Churches in Norfolk…Illustrative of Blomefield’s History of That County published between 1821-32.

Approximately 50 copies of Ladbrooke’s work (later published as a single volume in 1842) are offered in their original printed wrappers.

Antiques trade chiefs: Resourcefulness and ingenuity will be crucial in 2021