Duke’s has announced its inaugural Dorset Auction will take place on July 22, featuring “quintessential collections from Dorset characters such as Thomas Hardy and Lawrence of Arabia”.

This silver teapot inscribed Used by Thomas Hardy at Max Gate was gifted to the Rev R Bartelot by Emma Hardy. The estimate is £300-500 at the auction in Dorchester, where Hardy spent most of his life.

Other Hardy memorabilia includes letters from the Dean of Westminster to Rev Bartelot, guided at £100-200.

A letter marked Private and dated 1928 relates to the dean΄s permission to bury Hardy at the abbey and the controversy about Hardy’s Christianity; the response from Bartelot dated January 18, 1928, in unfinished form states “…nevertheless I sincerely believe him to have been at heart a Christian and a churchman”. 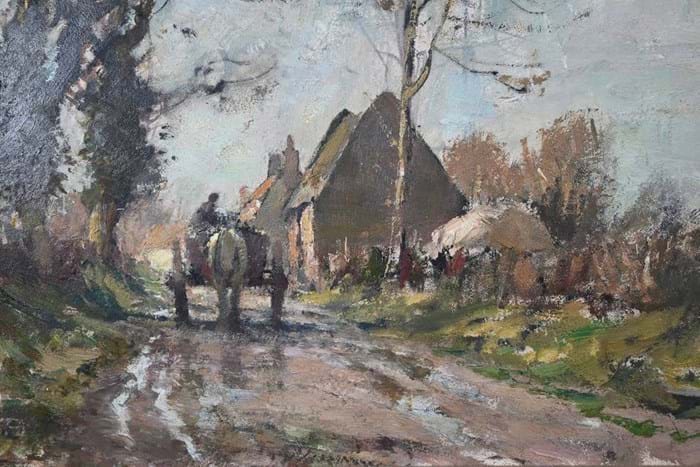 Edward Seago’s A Norfolk Lane With Farm Cart, an oil on board measuring 18in x 2ft (45 x 60cm), was previously with dealers Agnew & Son and Colnaghi before it was gifted to the vendor in 1972. Lawrence of Arabia UK Quad Poster for the 1971 re-release – estimated at £150-250 at Special Auction Services.

The two-day Music & Entertainment sale at Special Auction Services of Newbury on July 27-28 includes this Lawrence of Arabia UK Quad Poster, with poster artwork by Brian Bysouth for the 1971 re-release of this David Lean epic starring Peter O’Toole and Omar Sharif. Folded with light marks to corners, it measures 2ft 6in x 3ft 6in (76cm x 1.02m). Bonhams’ July 28 sale of Silver & Vertu includes a number of Irish provincial pieces. The Peter Ticher collection of Irish silver includes many pieces that he had inherited from his father, Dr Kurt Ticher, who emigrated from Germany to Ireland in the 1920s.

Kurt developed a keen interest in Irish Georgian silver, building up a large, important collection, some of it bequeathed to the National Museum of Ireland. Peter, his eldest son, continued to add to his collection throughout his life.

Dated 1798, it is engraved with the Cork city arms and is inscribed for Major General William Loftus (1752-1831), a British army officer and later MP. A veteran of the American War of Independence, he was appointed commander-in-chief in Munster in 1798 and took command of Laughlinstown camp during the Irish Rebellion that same year.

It is sold with a related Freedom of the City of Cork scroll, inscribed to Major Loftus and dated 12th day of September 1809. The vendor’s father purchased the sketch directly from the artist who was a personal friend.

ewbanks.co.uk or see this item at thesaleroom.com These watches were not retailed and instead given to divers who would test the valve functions in deep waters. This Elizabethan manuscript estate book of Thomas Cony of Bassingthorpe, Lincolnshire, c.1564-1608, comes for sale for the first time since the 17th century at Tennants of Leyburn on July 28.

This historical document revealing the domestic and commercial transactions of a powerful member of the English merchant class was first brought to public attention by the noted antiquary Edmond Turnor (1754-1829), who published a selection of passages and an introduction in the proceedings of the Society of Antiquaries in 1794. Wrestling events were very popular in northern England in Victorian times and the Grasmere Sports was one of the key fixtures. Two championship wrestling belts, together with photographs of the men who won them, are up for auction at Elstob & Elstob of Ripon, North Yorkshire, on July 24.

The first is a late Victorian 9ct gold and silver champion’s belt awarded to the great Cumbrian heavyweight wrestler Hexham Clark, dating from 1898. Born in Broughton, he was a regular at the Grasmere event that has been held annually since 1868.

David Elstob says: “The championship belts were highly prized and generally rated above the actual financial rewards attached to the contests. In fact, it became more important to win a coveted wrestling belt at Grasmere than a large cash sum elsewhere.”