Although some restrictions are still in place for now, many fairs and markets organisers are gearing up for a busy summer to serve pent-up demand. 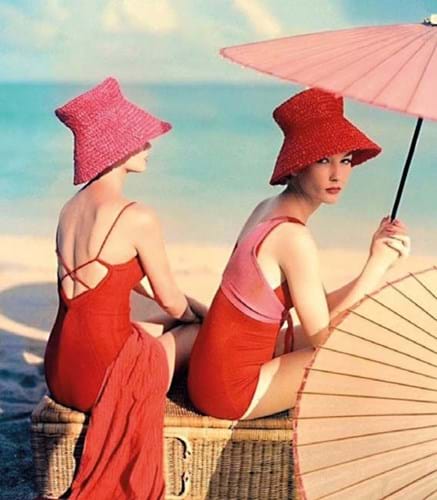 Swimming cossies are a big feature of the Great Seaside Vintage Fair.

Subscribe now
Here is a short focus on some of the UK’s fairs and markets delights this July and August. Reminder: always check the organisers’ websites for the latest updates before heading off…

For one day only on Saturday, July 17, Caroline Brown of Rose and Brown Vintage returns to Whitby Pavilion with her socially distanced Great Seaside Vintage Fair. This event offers 40-plus stalls of vintage fashion with a focus on swimming cossies (see picture top) and sunglasses.

Brown is also running her vintage weekend at Lotherton Hall, near Leeds, on Saturday and Sunday, August 14-15 with stalls spread out in the grounds of the Edwardian country house.

Most of PBFA’s summer book fairs in Scotland including the prime Edinburgh Book Fair are cancelled but two small ones remain, both in gorgeous village locations in the Highlands: Glamis on August 7 and Ballater on August 8.

Cockenzie House and Gardens at Prestonpans in East Lothian is a Scottish community charity which runs small fairs and markets. The next is on Saturday, August 7, held in marquees in the grounds of the 17th century country house. A must for antiques hunters in the south of England is IACF Ardingly, run over two days midweek at the South of England Showground in West Sussex. The next is on Tuesday and Wednesday, July 27-28. Online ticket sales are booming, says IACF.

The swallows are flying south next month as Arthur Swallow Fairs holds its three-day annual Decorative Home and Salvage Show in the grounds of Loseley Park, near Guildford, from Friday to Saturday, July 9-11.

This fair launched in 2014 and was the organisers’ first foray into the south of England. It tends to attract more stylists and props buyers than their northern fairs and, due to the show taking place in the high summer, antique and salvage gardenalia is often top of buyers’ shopping lists. One of Sunbury Antiques’ Wimbledon homes and antiques fairs.

This was a gamble but it has paid off with 2500 visitors at the event held this month. “We had 200 stalls at the fair which is a comfortable number but this place is so vast we could have many more, but I’m happy with this for the foreseeable. It’s all so exciting”, said the irrepressible Edward.

The next Wimbledon fairs are on Sunday, July 4, and August 1.

Etc Fairs’ Kim Jeffery is over the moon despite the prime minister’s announcement on June 14 regarding a delay to the end of restrictions.

The Holiday Inn in Bloomsbury, where she holds her antiquarian book and ephemera fairs, has advised that the book fair on Sunday July 11 – the first since March last year – can go ahead with a reduced capacity “so long as numbers do not go over 200 and everyone respects this”, said Jeffery.

Fired up and ready is the Kempton Vintage and Classic Arms Fair on Sunday, July 4, at Kempton Park Racecourse, held outdoors. Organised by Peter Binfield, this event was a hit with both exhibitors and visitors from when he launched it in 2017 with one annual fair becoming two and then three, as now. Timely purchases can be made at the Birmingham Clock and Watch Fair.

The Motorcycle Museum in Birmingham is the setting for the Birmingham Clock and Watch Fair. The next on Sunday, July 18, features 100 stalls and Hall 1 is sold out.

Antique Forum Group’s long-running two-day monthly antiques and collectors fair at Uttoxeter Racecourse, set in the Dove Valley in Staffordshire, offers 100- plus indoor pitches and unlimited space outside. The next is on Saturday and Sunday, August 7-8. Antiques street markets attract scores of buyers, especially in the holiday season, and Blackdog Events’ annual fairs in two Suffolk towns will run in Bungay (pictured in 2019) on Sunday, July 25, and Sunday, August 29, in Halesworth. Both have been going for more than 25 years and now attract around 90-plus dealers at each fair.

The high street in the market town of Stalham in Norfolk will be lined with stalls on Sunday, August 15, for the annual mega vintage market when local shops will be open to complement it all.

The Fair on the Green in Southwold, one of East Anglia’s most visited seaside towns, runs its annual antiques and collectors’ fair on Sunday, August 1. A view of the Dorset brocante.

This garden setting, pictured, looks just right for the French brocante, textiles and homewares which will be laid out in style by 40 exhibitors on Sundays July 4 and August 30 in marquees in the gardens of the elegant Deans Court in Wimborne Minster, organised by Dorset Brocante.

Chris Brown of Grandmas Attic Fairs has been in touch to say that after the success of its first antiques fair in Salisbury in March last year it is back at the Rivers Leisure Centre on July 4. He said: “We already have 100 stalls booked so it’s looking to be a successful fair. The March event saw over 800 people through the doors.

The big daddy of charity car boots is run at Wilton House, near Salisbury, which is back this year for the traditional annual bank holiday Rotary Car Boot Sale on Monday, August 30.

“Acres of outside pitches” is how the large two-day antiques and vintage fair by AFC Fairs held at the Royal Showground, Wadebridge in Cornwall is described, but it also has a large permanent building.

It promises to be a busy weekend for the fair on Saturday and Sunday, August 28-29.

Whatever the weather: an IACF Ardingly picture special