Bought for just $35 at a yard sale in Connecticut last year, this small blue and white ‘lotus bud’ bowl proved one of the star lots of Asia Week New York. 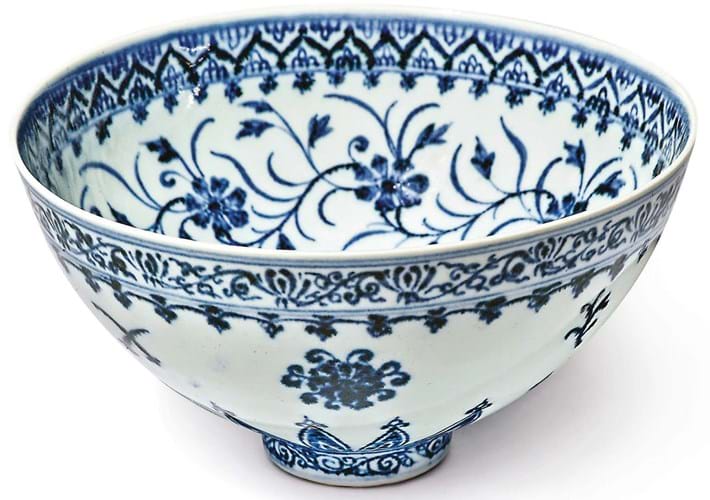 Shortly after making the purchase near New Haven, the buyer sent photographs of the 6¼in (16cm) bowl to Sotheby’s Asian art department. “We instinctively had a very, very good feeling about it,” said Angela McAteer, head of Sotheby’s Chinese art department in New York.

It was later confirmed as one of only a handful of companion pieces known, including examples in the British Museum and the V&A. Another was sold at Christie’s Hong Kong in 2007 for HK$700,000 (£70,000).

The Yongle court brought a very distinctive style to the newly built porcelain kilns of Jingdezhen – perfecting a smooth porcelain body, an unctuous silky glaze and a recipe for deep blue cobalt decoration. The shape known as lotus bud (lianzi) or chicken heart (jixin) would seem to be purely Chinese. Alongside lotus, peony, chrysanthemum and pomegranate, blossoms are trefoil motifs borrowed from earlier Khorasan metalwork – the result of regular contact with the Islamic world.

McAteer added: “The result epitomises the incredible, once-in-a-lifetime discovery stories that we dream about as specialists in the Chinese art field… it is a reminder that precious works of art remain hidden in plain sight just waiting to be found.”

See Pick of the Week for more highlights from Asia Week New York.