Your starter for 10 – can you identify the artist of these still-lifes? Samuel Peploe, right? 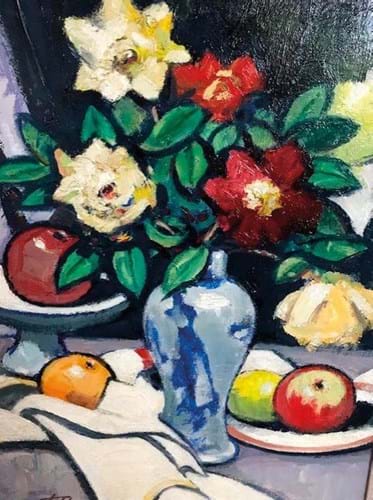 A still-life by William Walker Telfer – a record £3400 at Kinghams.

While these pictures might look uncannily like the work of the famous Colourist, they are actually by fellow Scottish painter William Walker Telfer (1907-93).

Sometimes described as a ‘fringe’ Colourist, he studied at the Falkirk Art School and exhibited at the Society of Eight whose members included (at various times) FCB Cadell, Sir William Gillies, John Duncan and also Peploe himself. It seems that Telfer may have, at times, come close to the fine line between inspiration and imitation.

In his later years he moved to Bedfordshire, where he died in 1993.

While pictures by the artist have not sold much at auction before, a cache of works kept in his former property, a large Victorian house near Woburn, was recently consigned to Kinghams (23% buyer’s premium) in Gloucestershire as part of the house contents which were being dispersed by Telfer’s grandson.

A mix of oils and watercolours, subjects included still-lifes, landscapes, views of Scottish lochs and even a few depicting the garden and house at his Bedfordshire home itself.

The first tranche of 27 works were offered at the Moreton-in-Marsh saleroom on October 8 with 23 lots selling for a £9580 hammer total. Some of the more minor works will follow at Kinghams’ Cotswold Interiors auction in November.

Purchasers were primarily London and Yorkshire clients, according to the saleroom’s associate director Adrian Rathbone.

The top lot here, a Peploe-esque still-life with flowers and fruit drew plenty of interest and surpassed a £400-600 estimate, selling at £3400 to client from North Yorkshire bidding online via thesaleroom.com. The signed oil on artist’s board, which measured 19in x 14¼in (48 x 36cm), set a new record for Telfer (source: Artprice by Artmarket), surpassing another still-life sold for £2200 at Hansons in October 2016. Another still-life painted very much in a similar vein overshot a £300-500 estimate and sold at £1900 to private London client.

Also impressing was a port scene with fishing boats that brought a strong competition against a £50-80 pitch, selling at £500 to a Glasgow buyer.