Pictured here are two early English pottery tankards – both of them documentary pieces. 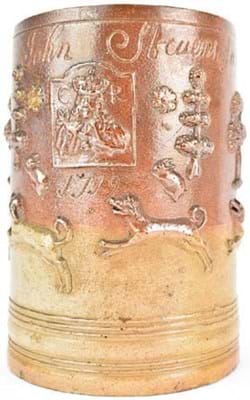 A typical two-tone brown saltglazed mug of the type made in London and Bristol in the first quarter of the 18th century, it has applied decoration of a clockwise hunt that appears together with a badge of Charles II – perhaps a veiled reference to the Hanoverian succession just a few years earlier. The inscription John Stevens in Stanwell 1719 suggests it was probably made in Vauxhall or Fulham.

Although immigrant Dutch or German potters were probably active earlier in the century, John Dwight’s pottery in Fulham is the earliest clearly documented maker of stoneware in England.

Supported by two scientific luminaries, Robert Boyle and Robert Hooke, he was granted a patent in 1672 for “the mistery of transparent earthenware, commonly known by the names of porcelain or china, and of stoneware, vulgarly called Cologne ware”. 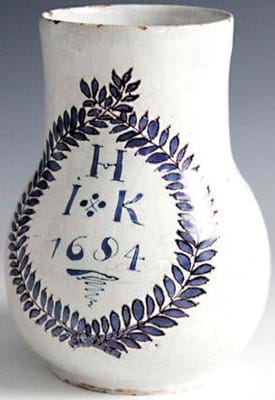 A mug from the previous generation of London potters was offered by Trevanion (20% buyer’s premium) in Whitchurch, Shropshire on October 20.

This delft tin-glazed earthenware tankard, 7in (17cm) high is simply decorated with a laurel wreath cartouche and the initials IHK over the date 1684. It was probably made at Pickleherring Quay.

In excellent condition, showing only surface crazing and some nibbles to the rim, the mug took £3600 (estimate £100-150).