A round-up of art and antiques news from the previous seven days, including a sale in Switzerland of Marie Antoinette's bracelets containing 112 diamonds. Two diamond bracelets that once belonged to Marie Antoinette – SFr6.2m (£5m) at Christie’s in Geneva.

Two diamond bracelets that once belonged to Marie Antoinette (1755-93) have been sold at auction in Geneva for SFr6.2m (£5m), or SFr7.46m including buyer’s premium.

Guided at SFr1.8m-3.7m, the bracelets containing 112 diamonds were offered at Christie’s Magnificent Jewels auction at the Four Seasons Hotel des Bergues held on November 9. The jewels had been purchased by Marie Antoinette in 1776 and were paid partly in gemstones from the queen’s collection and partly with funds she received from King Louis XVI.

In 1791 the bracelets were sent by the queen with other personal items in a wooden chest to a former Austrian ambassador in Brussels for safekeeping while she was in prison.

When Marie Antoinette was guillotined during the French Revolution the box was opened and the bracelets were given to Marie Thérèse Madame Royale (1778-1851), her eldest daughter. The bracelets stayed within the family for more than 200 years. The buyer, bidding via the phone, was not disclosed. Among the items stolen at Olympia from jewellery designer Emily Nixon was this Prussia cove rift ring.

Jewellery designer Emily Nixon is appealing for help to track down diamond and sapphire rings stolen from her fair stand.

The Cornish designer had been selling at the Spirit of Christmas Fair at Olympia London (running from November 1-7 concurrently with The Winter Art & Antiques Fair). The rings were stolen on the final day when the event was closed and the stand was being packed up. The diamond and sapphire rings and a pendant had been packed into a bag from the stand.

Nixon’s team were attending their first major retail show since before the pandemic began.

For all the images of the other missing items contact Emily Nixon on: emily@emilynixon.com 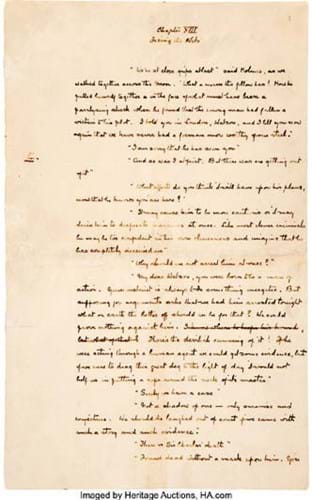 The manuscript copy of Sir Arthur Conan Doyle’s 'The Hound of the Baskervilles' that sold at Heritage Auctions.

Published in 1902, Conan Doyle resurrected his most famous character Sherlock Holmes in this novel after killing him off in 1894.

According to Heritage, the New York publisher of the book McClure, Phillips & Company launched a publicity campaign in an effort to promote it and asked Doyle for the original manuscript which was broken up and sold off individually.

Unfortunately the manuscript was written on very acidic paper which meant it deteriorated quickly so not many pages have survived. This has added to the scarcity of this page (pictured above).

Heritage estimated it in excess of $170,000 in the November 6 Manuscripts sale. A John Constable (1776-1837) oil sketch of Salisbury Cathedral is among the lots headlining Christie’s Old Masters evening sale on December 7.

The picture was fondly referred to as ‘The Vision’ by the artist’s family with whom it remained until the late 19th century.

It was then sold by New Bond Street dealer Dowdeswell to Thomas W Bacon (1873-1950) of Ramsden Hall in Essex, before later being sold by one of his descendants sometime after 1984.

Although it has subsequently changed hands twice – once via London dealer Simon Dickinson – this will be the first time it has appeared at auction.

A full-sized preparatory study for his Salisbury Cathedral from the Bishop’s Grounds, a finished painting now in the Huntington Library and Art Gallery in San Marino, California, the sketch dates from 1823 and is the only rendering of this celebrated view of the cathedral remaining in private hands.

The most viewed stories for week November 4-10 on antiquestradegazette.com

The total number of shares in the British Guiana One-Cent Magenta stamp offered by Stanley Gibbons for £100 each on its new fractional ownership platform called Showpiece. The firm acquired the stamp for $8.3m (£5.9m) including premium at Sotheby’s New York in June. So far, around 50,000 shares have been sold with over 45% of all transactions coming from outside the UK.