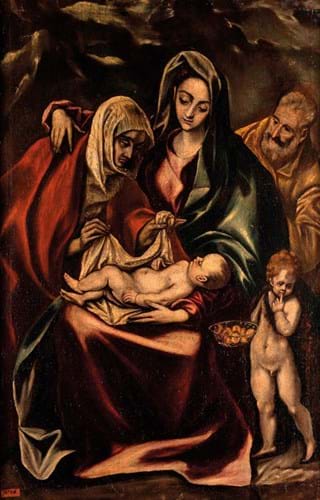 As international experts disagreed about the exact nature of the attribution, the auctioneers at Hargesheimer (25% buyer’s premium) in Dusseldorf decided to err on the side of caution when offering a 3ft 4in x 2ft 2in (1.02m x 67cm) painting of The Holy Family with Saints Anna and Joachim in the sale on September 11.

While the printed catalogue entry classified it as the work of El Greco, a footnote in the adapted online description stressed that it was being offered as “El Greco (or workshop/school?)”.

It had come from a local collection, but could be traced back to the collection of the Marques de Villalonga in Seville and was also shown at the Ibero-American Exposition, held in that city in 1929.

From the outset, the reserve had been set at a moderate €28,000, leaving the bidders plenty of scope. They rose to the occasion and pushed the price to €120,000 (£102,565), which is still considerably lower than the price one could expect for a secured work by the artist. The buyer was a European collector. There was no uncertainty about the authorship of an early 20th century landscape that came up for sale on the previous day. It was painted by Henry Moret, a member of the school of Pont-Aven and as such closely involved with Paul Gauguin. He embraced the spirit of Impressionism to such an extent that in his later works no traces of his academic artistic training at the École des Beaux-Arts in Paris were apparent.

Born in Cherbourg in 1856, he spent much of his life after his training in the capital in Brittany, fascinated by the countryside. In 1880 he first took part at a Paris Salon, exhibiting a marine landscape.

After the turn of the century, Moret enjoyed a certain amount of international success. He signed a contract with the renowned art dealer Durand-Ruel, who organised exhibitions of Moret’s works in New York in 1900 and 1902.

A handful of collectors joined the competition when Mehlis (23% buyer’s premium) in Plauen offered a 19th century ivory and ebony chess set in their sale of August 26-28.

The realistically carved figures came complete with a wooden box but the auction house could provide no information about their origin. The starting price of €100 was obviously enticing and the bidding took off. Bids came in from several parts of Germany, from Luxembourg and the Netherlands.