Porcelain treats in store at Doyle

Doyle’s Asian art auction in New York on September 20 will include porcelain from a collection assembled over many decades by department store heiress Sarah Belk Gambrell (1918-2020). 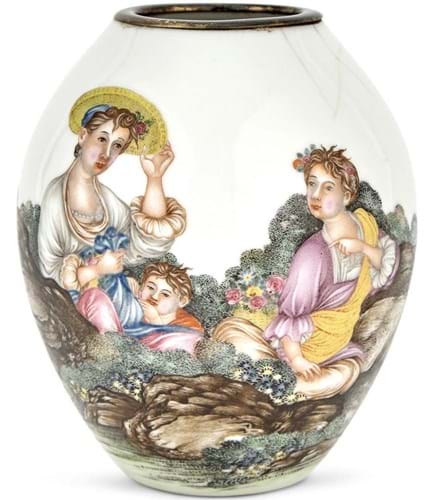 She was the daughter of William Henry Belk, who founded the Belk department store chain in the American South, and the wife of banker Charles Glenn Gambrell. She maintained homes in Charlotte and New York.

Highlighting the collection is a once magnificent 18th century imperial porcelain vase decorated in falangcai or ‘foreign enamels’ with a colourful scene of two European women and a child in a garden.

As a piece that reflects the Qianlong emperor’s (1735-96) admiration of the European aesthetic, it would doubtless make a fortune if in perfect condition but comes for sale reduced from the original bottle form. It now stands 5in (12cm) high and is capped with silver mount. The estimate is $100,000-300,000.

Prior to the Belk Gambrell collection, the vase was owned by Herschel Vespasian Johnson (1894-1966), a US foreign service officer

Get your claws into a dragon bowl