Local artists and designers are among the names in the spotlight at the inaugural Cotswolds Curated event.

Members of the Cotswold Art & Antiques Dealers’ Association (CADA) are holding a week of exhibitions in shops and galleries across Gloucestershire, Oxfordshire and Worcestershire from April 2-10.

Among the themed shows is dealer David Pickup’s On The Cotswold Hills exhibition including a selection of English furniture and works of art dating from the 17th-20th centuries and featuring Cotswold Arts & Crafts pieces such as a plaster relief by Chipping Campden guildsman and sculptor Alec Miller (1879-1961).

Pickup is joining Architectural Heritage at Taddington Manor which is showing Evolution to Extinction and Back – a journey through Modern British sculpture starting with Edward Bainbridge Copnall’s The Evolution. The extinction part of the show is represented by dinosaur drawings by Bryan Kneale.

Sarah Colegrave opens a pop-up gallery at 14 Market Square, Woodstock, for her exhibition The Cotswold Group.

She is selling works by members of the Birmingham School of artist-craftsmen with particular interest in those who settled in the Cotswolds such as Margaret Gere (1878-1965). 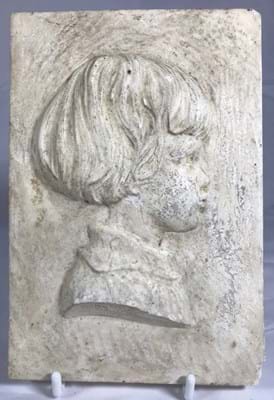 A number of items had belonged to Major Armstrong – the officer in charge at the last ‘battle’ on English soil in 1838 (see picture caption).

Also in Witney is A School Room Exercise, an exhibition of samplers from the 18th and 19th centuries at Witney Antiques. A number of samplers are on offer at Witney Antiques’ A School Room Exercise show. This 19th century example was worked by the 11-year-old Frances White at Mrs Long’s school. It is priced in the region of £2500.

Over in Oxford, Legge Carpets will open Tribal Weavings with artefacts woven by women from Iran and central Asia including bags, rugs and carpets, mostly dating from the 19th century. In Worcestershire, Haynes Fine Art in Broadway is celebrating its 50th anniversary with a Spring Exhibition featuring more than 300 pieces of 19th to 21st century art and sculpture. Also in Broadway is Trinity House Paintings which is holding The Spring Salon 2022 comprising a selection of Impressionist, Modern British and Contemporary pieces.

The web shop window: Austrian artist's ‘Antics on the Ice'