The Blickensderfer Typewriter Co of Stanford, Connecticut, introduced the Niagara ‘index’ typewriter in 1902. 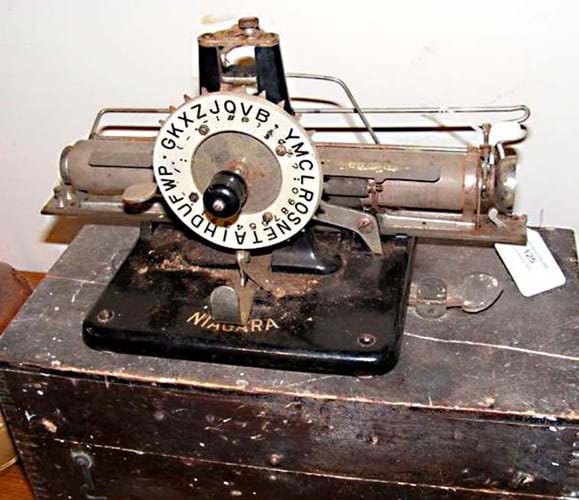 Priced at $15 it was relatively inexpensive, smaller and lighter than many other typewriters on the market and made using far fewer individual parts.

Essentially it used the carriage, escapement and typewheel of earlier Blickensderfer models, but instead of keys, a circular index could be turned to select a character. It was sold by George Blickensderfer as the Niagara and also rebranded for other markets as the Best, the Stella, the Marion and the Dactyle.

However, probably due to the absence of a keyboard, the typewriter did not sell particularly well.

The now familiar ‘Qwerty’ keyboard (debuted on the Sholes & Gliddon typewriter in 1874) was fast becoming the standard and many typists who had learned to use it were reluctant to experiment with a new system.

Today the Niagara is one of the rarer and more expensive of early 20th century typewriters.

The example pictured here – in somewhat tired but seemingly complete condition with its original stained pine box – came for sale at HRD Auctions (20% buyer’s premium) of Brading on the Isle of Wight on March 15.

Cat sat on a shelf came all the way from Egypt

Keeping the memories alive on the Isle of Man