A view of this year’s BRAFA in its new venue at Brussels Expo.

The BRAFA art fair was back after two Covid-enforced postponements for a face-to face staging which took place this year from June 19-26.

Having been held at the Tour & Taxis exhibition centre since 2004, the Belgian event now has a new venue – Brussels Expo at Heysel.

“As soon as they arrived in the aisles of the fair, visitors reconnected with the elegant and friendly atmosphere to which BRAFA had accustomed them,” said Beatrix Bourdon, managing director of BRAFA. “The move to Brussels Expo has been a success. Both visitors and exhibitors appreciated the new space and for us, that is extremely positive.”

Among the early sales was a 15¾in (40cm) high carved boxwood Christo Vivo by the 17th century Flemish sculptor Jan III van Doorne (1616-63) which was purchased by the Rijksmuseum from Floris Van Wanroij Fine Art, the Dutch dealer in Old Master paintings, haute epoque sculpture and works of art.

Xavier Eeckhout, a Paris sculpture dealer specialising in animalier works, sold several sculptures at the opening weekend including an 11in (28cm) wide white marble model of a pigeon by the French sculptors Jan et Joël Martel (1896-1966) and a bronze by Armand Petersen (1891-1969) of an African donkey (Anon d’Afrique), each priced in the region of €45,000-60,000. 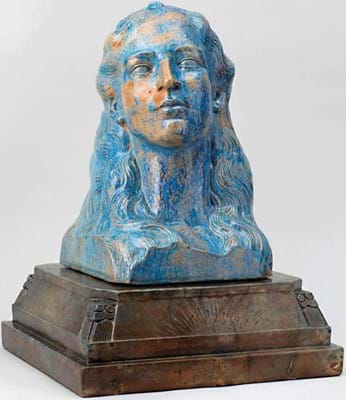 Francis Janssens van der Maelen sold several sculptures early in the fair including Isis, a ceramic portrait from 1922 by Marcel Wolfers (1886-1976) and the Belgian ceramicist Roger Géurin (1896-1954) of one of Wolfers’ cousins, Yvonne Dubois-Wolfers. Sold for around €45,000, it was one of a number of works from the Wolfers dynasty featured on the Belgian dealer’s stand. Paul Delvaux’s l’Aurore in watercolour ink and feather on paper sold at BRAFA by Die Galerie for €80,000.

The Belgian dealer in Old Master paintings, drawings and sculpture, Klaas Muller, sold around a dozen works including a drawing of the head of a woman by Jacob Jordaens (1593-1678) which is a preparatory study for a work currently exhibited at the Louvre.

Gianmarco Cappuzzo Fine Art, based in London – a new exhibitor this year – found a buyer for a 4ft 3in x 3ft 6in (1.3m x 97cm) Caravaggesque oil on canvas of David with the Head of Goliath by Elisabetta Sirani (1610-1670) dating from c.1655-70. Despite sustained interest from two museums, it ended up selling to a private collector.

In the field of tribal and ethnographic art, Brussels dealer Didier Claes sold a Nkisi Songye figure from the Democratic Republic of Congo as part of his Nkisi exhibition dedicated to “objects of power”.

Italian dealer Dalton Somaré sold half a dozen pieces including a Gouro mask with a figure from the Ivory coast and a Kota reliquary figure from Gabon. Gallery Montagut from Spain sold around 30 pieces of tribal art to new Belgian, French, Dutch, German, Spanish, Italian and American collectors as well as its usual clients, while the Belgian dealer Serge Schoffel sold an entire collection of bullroarers from the Gulf of Papua to one collector for a figure in excess of €50,000. The Galerie Hioco sold this Indian red sandstone lion-headed capital for around €60,000 at BRAFA.

Galerie Hioco from Paris, which specialises in Asian works of art, sold around a dozen items including an 18in (46cm) high Ayutthaya era Buddha’s head in gilt copper alloy from Thailand dated to the c.16th century for around €25,000 and an Indian red sandstone lion-headed capital from the Mathura period of Kushan (c.2nd century) for around €60,000.

New exhibitor Florian Kolhammer from Austria sold a 6ft 5in (1.71m) high display cabinet from c.1946 in mahogany, glass, mirror glass and brass by the Austrian/ Swedish designer Josef Frank (1885-1967), as well as a Secessionist chandelier from c.1900 designed by Koloman Moser (1868-1918) featuring glass by Johann Loetz Witwe. Each was priced in the region of €18,000. Display cabinet designed by Josef Frank c.1946 from a Swedish private collection, sold by Florian Kolhammer at BRAFA for price in the region of €18,000.

BRAFA will return to Heysel next year but will be back in its usual January/ February time slot, running from January 29 to February 5.

The web shop window: a 19th century portrait of a smuggler