A four-day US sale of comics and comic art produced some extraordinary results – with 4900 would-be buyers registered and every one of the 1333 lots sold to bring a premium-inclusive total of $23.76m (£17.34m). 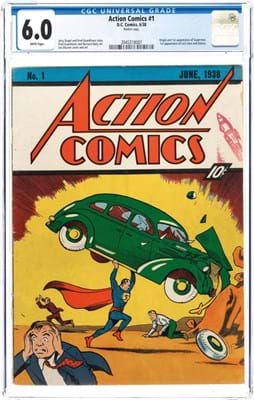 Among the star turns and sold at $2.8m (£2.04m) at this January 13-16 sale at Heritage (20% buyer’s premium) was Mike Zeck’s artwork for a single page from Secret Wars No 8, a publication of 1984 that tells the story of how the Web-Slinger came by his now iconic black costume.

For those not familiar with all these comic legends, and I include myself among that number, this was a character, or rather a costume that proved to be alive and have its own agenda, morphing into a villain and anti-hero known as Venom.

What the consignor paid in the late 1980s for this artwork was not revealed, but moments earlier another single-page artwork produced for that same issue of a comic that was initially intended to help sell toys had been bid to $240,000 (£175,180). Whoever it was certainly had a very special day at auction.

More instantly recognisable to those not overly familiar with the super-heroes and heroines of the comic world will be a copy of Action Comics No 1 of 1938 in which Jerry Siegel and Joe Schuster introduced the world to Superman – aka Clark Kent – and Lois Lane. Graded CGC 6.0, it made an auction-record $2.65m (£1.93m).

The highest graded copy that Heritage has ever offered, it is one also known as the ‘Rocket Copy’ from the red spaceship stamped on the cover by its then 13-year-old first, and until this sale, only owner.

This exceptional first session of the Heritage event also included a copy of Detective Comics No 27 of 1939, the issue that marked the first appearance of Bob Kane’s creation, Batman.

The latter featured the debut of what Heritage termed “obscure space pirates called the Starjammers”.