A selection of 13 upcoming lots from auctions taking place around the UK. A George IV carved mahogany reading/library chair attributed to Morgan & Saunders – estimated at £3000-5000 at The Pedestal.

The property of an Oxfordshire estate, this George IV carved mahogany reading/library chair attributed to Morgan & Saunders has a guide of £3000-5000 at the Fine Interiors sale staged by The Pedestal in Henley- On-Thames on March 8.

A design for a chair of this type, including its ratcheted reading rest and small stationery drawers, can be seen in Ackermann’s Regency Furniture and Interiors together with an explanation as to its use. It concludes: “As a proof of their real comfort and convenience, they are now of great sale at the ware-rooms of the inventors, Messrs. Morgan and Saunders, Catherine Street, Strand.”

thepedestal.com or view this item at thesaleroom.com Studio ceramics from the collection formed over 40 years by New York art dealer Dr John P Driscoll set many new benchmarks when sold as a joint auction by Maak and Phillips in 2021. The Art of Fire sale generated more than £5m.

Driscoll (whose dealing speciality was Hudson River School pictures) owned more than 1600 pots and a further 230 lots will be offered by Maak in a timed online sale titled East Meets West closing on March 10. Day two of the Modern & Contemporary Prints & Multiples auction from March 8-9 at Roseberys of West Norwood features 241 lots from the estate of master printer Alan Cox.

He initially set up Grafik in Whitechapel, then later Zinc Editions and latterly Sky Editions in the Docklands. Many of the prints in this auction have the Sky Editions blindstamp in the paper.

Aside from being a lithographer, Cox made his own printed designs. He worked with Paula Rego in 1982 on three large lithographs and was one of 10 artists invited to contribute a screenprint to the Royal Academy Schools portfolio Number 1, with the other contributors including Terry Frost, Peter Blake, Bruce McLean and Sandra Blow.

roseberys.co.uk or view this item at thesaleroom.com Menu for a seven-course feast at The Magicians’ Club dinner signed by Harry Houdini – estimated at £800-1200 at Ewbank’s.

His final show took place at the New Cross Empire in London on June 12, 1920, six days after The Magicians’ Club dinner was held in his honour at Bennion’s Restaurant in Oxford Street.

This menu for a seven-course feast, signed by Houdini and his wife ‘Bess’, is expected to bring £800-1200 at Ewbank’s in Woking on March 4. It is part of a group of Houdini items that come by descent from Richard Bertram Ogle (1889-1976), an artist who painted Houdini’s portrait during the 1920 tour.

ewbankauctions.co.uk or view this item at thesaleroom.com The picture was commissioned in 1936 by JFN Lawrence, whose family lived at the Essex house from 1913-68, and it has passed by descent in the same family.

According to accompanying documents, Whistler – “a pale, dark-haired young man, friendly but evidently shy” – captured the house in preparatory drawings on a cold June day. However, he filled the finished picture with warmth and golden light.

Whistler, a key figure among the Bright Young Things and British high society between the wars, was killed by a mortar attack in the Second World War while serving in the Guards Armoured Division. This early 18th-century French silver table bell with wrythen handle, ball finial and engraved foliate decoration comes for sale at Lyon & Turnbull in Edinburgh. Part of a March 9 silver sale, it is estimated at £800-1200.

lyonandturnbull.com or view this item at thesaleroom.com Poster designed by Dora Margaret Batty promoting an RAF at the Hendon Aerodrome in 1932 – estimated at £300-600 at Antikbar.

The sale of original posters at Antikbar in London on March 19 includes a large number of small format London Underground posters advertising a variety of inter-war events.

This sheet, designed by Dora Margaret Batty (1891-1966), features an elegant Art Deco image of a plane leaving a contrail as it loops in the sky. Made by the Dangerfield Printing Company, it promotes an RAF display that took place on June 25, 1932 at the Hendon Aerodrome.

antikbar.co.uk or view this item at thesaleroom.com 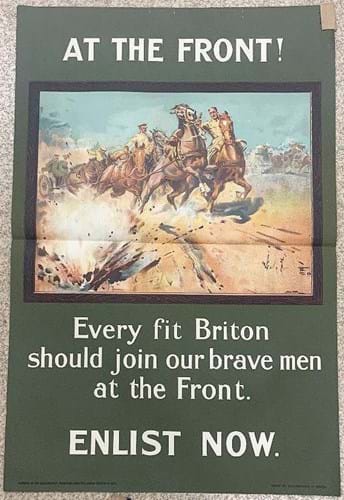 The sale at Brighton & Hove Auctions on March 4 includes a collection of First World War recruitment posters previously owned by ‘a former employee of the War Office’. Most come unframed and unlined in fine folded condition.

This well-known image c.1915 by Lionel Edwards titled At The Front! Enlist Now shows horse artillery in battle alongside the legend Every fit Briton should join our brave men at the Front. It is guided at £200-400.

brightonandhoveauctions.co.uk or view this item at thesaleroom.com An advertising enamel sign Agent For Collinsons Tea – offered with a starting bid of £160 at GW Railwayana.

This advertising enamel sign Agent For Collinsons Tea measures 12 x 8in (30 x 20cm). In good condition, it has a starting bid of £160 at GW Railwayana in Evesham on March 11-12.

gwra.co.uk or view this item at thesaleroom.com Etching of Dieppe harbour by CRW Nevinson – estimated at £3000-5000 at Modern Art Auctions in Scarborough.

This rare etching of Dieppe harbour by CRW Nevinson (1889-1946) is dated 1923. Signed in pencil and inscribed with the title, it is one of only a handful of proofs pulled and was first exhibited at Alex Reid and Lefevre Gallery, London 1927.

modernartauctions.co.uk or view this item at thesaleroom.com Frank Shenton’s oil on board Early Morning, Abney Church, Mossley, signed and dated ‘63, has a guide of £300-500 at the sale of Northern Art at Wilson 55 in Nantwich on March 10.

Shenton (British 1920-99) taught art at Tameside College for 30 years, occasionally exhibiting at the Royal Academy. His watercolour of Ashton War Memorial was adopted by Manchester Museum in 1991.

wilson55.com or view this item at thesaleroom.com A single-owner contents sale at Swan Fine Art in Tetsworth on March 10 includes, estimated at £200-400, this Tunbridgeware writing slope decorated with architectural scenes and vignettes of flora and fauna.

Complete with fitted interior including two ink bottles, a pen holder, original red velvet slope surface, it is the work of Henry Hollamby (1842-91), one of the Tunbrideware exhibitors at the Great Exhibition in 1851 and the London International Exhibition in 1862.

theswan.co.uk or view this item at thesaleroom.com This oil on board, The Tennis Match, by the German artist Josef Oppenheimer (1876- 1966), was given to the present owner by the sculptor Dame Elisabeth Frink.

Righting the wrongs with exhibitions for International Women’s Day