Shell posters sure to create interest wherever they sell

The You Can Be Sure Of Shell adverts are some of the most familiar and renowned examples in British graphic design. They were commissioned from emerging and established artists by Jack Beddington, who by 1932 had been promoted to assistant general manager and director of publicity for Shell-Mex and BP.

Beddington had a keen eye for young talent and the list of artists who contributed included Ben Nicholson and Graham Sutherland, Edward McKnight Kauffer, with styles ranging from Vorticism to Surrealism. Many chose to promote not only petrol and oil but also the pleasures of the motoring lifestyle.

Somerset auction house Dore & Rees (25% buyer’s premium) offered a Paul Nash (1889-1946) design in its Automobilia sale on April 27. The saleroom noted: “During the 1930s, and in response to the objections at the time of SCAPA (The Society for Checking the Abuses of Public Advertising) against so-called ‘obtrusive’ roadside advertising hoardings, Shell began instead to attach posters to the sides and backs of goods vehicles.”

The inter-war ads would adorn a delivery lorry transporting fuel to garages and roadside pumps, becoming known as The Lorry Bills as a result. They promoted not just the product but Britain as a whole – especially motoring trips.

This particular campaign suggested third-party endorsement from well-respected members of society such as scientists and sportsmen, to promote the use of Shell fuels.

With the line Footballers Prefer Shell, the Nash lithograph in colours, printed by Waterlow in 1935, was described as showing ‘minor signs of aging with minor tears to the edge of the paper’. The 2ft 6in x 3ft 9in (76cm x 1.14m) poster sold below estimate at £1500. Another striking example from the Shell series emerged at New York saleroom Swann (25/20/12% buyer’s premium) on February 24 this year among a varied selection of car posters.

These Men Use Shell, from 1939, 2ft 5½in x 3ft 8in (75cm x 1.12m), printed by Waterlow, London, and graded B+, sold just above top estimate at $1600 (£1200). The design was by British designer and academic Richard Guyatt, who, according to the Royal Academy, has been described as “one of the 20th century’s most seminal figures in the world of graphic design”.

He was the youngest-ever professor at the Royal College of Art on appointment in 1948 and rector from 1978-81. Guyatt was a consultant designer to Wedgwood, WH Smith and other British companies, created coins for the Royal Mint and designed postage stamps for the Royal Mail. For the 1951 Festival of Britain, he co-designed the Lion and the Unicorn Pavilion. 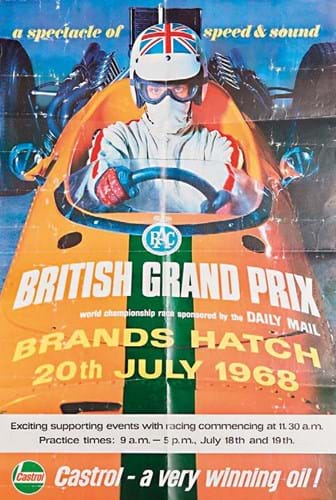 Classic British and European motoring posters were offered at New Zealand auction house Webb’s (18.5% buyer’s premium) in a sale closing on February 16. They featured strongly in a collection that had been the pride and joy of self-confessed motoring fanatic David Greeney for decades. He first started collecting in the 1950s. The posters included in this selection featured the cars, drivers, and graphic design of the 1960s-90s.

How to wake up in Hawaii