Until the widespread advent of the wireless, barrel organs were a familiar sight (and sound) on the streets of Berlin and other major German cities. 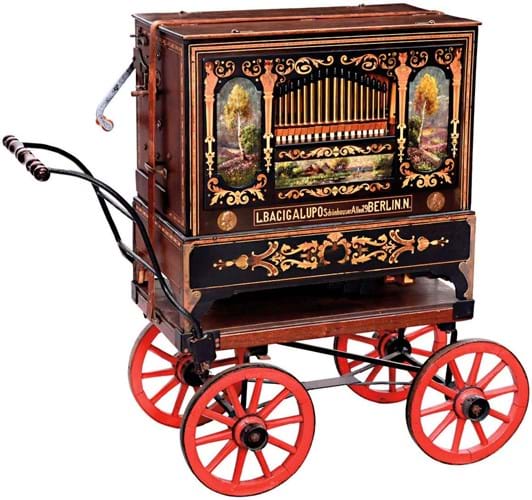 The majority of the highly decorative instruments were manufactured by several generations of the Bacigalupo family.

In 1873, the Italian organ builder Giovanni Bacigalupo moved to Germany and set up a company producing street organs.

Among the relatives and descendants who carried on his work was Luigi Bacigalupo (1895-1967), the last owner of the company. He built an impressive trumpet barrel organ with 38 keys that came under the hammer at Auction Team Breker (21.8% buyer’s premium) in Cologne on March 26.

The hand-driven musical movement was fitted with trumpet, violin and bass pipes as well as pan flutes, all combining to produce a full-bodied sound, expansive enough to fill the inner courtyards of Berlin houses with music. Appreciative listeners would throw down coins from their windows.

The organ, which was built c.1925, came with three large pinned barrels, each with eight popular melodies.

Headless but not valueless