Dealers reported new and old clients coming through the doors at TEFAF Maastricht as the flagship art and antiques fair opened to the public. A view of one of the aisles at TEFAF Maatricht 2018.

The general opening of the fair today followed yesterday’s ‘invitation only’ preview day that kicked off at 10am and finished an hour earlier than previous years as the organisers tweaked the format.

Fewer free tickets were given to exhibitors to distribute but many welcomed this policy saying that it tackled the problem of too many party-goers detracting from the more focused conversations dealers like to have with clients.

Although a number of dealers told ATG the preview was somewhat quieter than in previous years, several said that the start of this year’s fair had already gone well and they were optimistic of good business being done. Dr. Jörn Günther Rare Books sold a rare incunable of Christopher Columbus’s first account of the discovery of the New World, Epistola de insulis nuper inventis, in its second Basel edition of 1494, priced at approximately €1m. The dealership also sold two miniatures that were illuminated in Simon Bening’s workshop in Bruges between 1510 and 1520 to a private collector for an undisclosed price.

Giacometti Old Master Paintings sold an oil on canvas of Saint Stephen by Bernardo Cavallino to a new client. It was one of three paintings the gallery has sold so far. An oil on canvas of Saint Stephen by Bernardo Cavallino sold at TEFAF 2008 by Giacometti Old Master Paintings to a new client.

Day & Faber sold a chalk portrait of the artist Maurice Eliot by Charles-Lucien Leandre to a French collector, priced at €22,000. The chalk portrait of the artist Maurice Eliot by Charles-Lucien Leandre that Day & Faber sold at TEFAF2018. It was priced at €22,000.

H. Blairman & Sons reported sales including a Gordon chair, ticketed at £95,000, bought by an existing client and a Thebes stool sold to a new client.

Colnaghi sold Mater Dolorosa an oil on canvas by Bartolomé Esteban Murillo for a seven-figure sum to a private European collector. The sale took place “almost immediately” after the fair opened according to a spokesperson from the gallery. 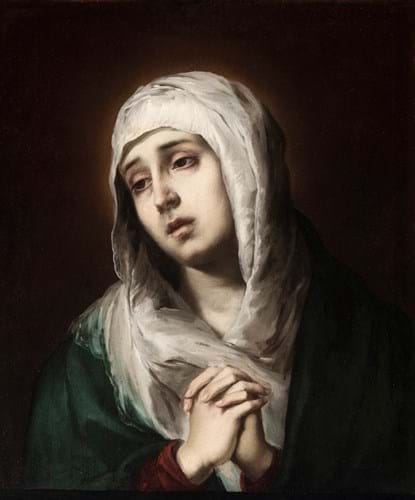 ‘Mater Dolorosa’, an oil on canvas by Bartolomé Esteban Murillo that Colnaghi sold for a seven-figure sum to a private European collector at TEFAF Maastricht.

Tomasso Brothers Fine Art sold an oil on canvas Castor and Pollux (1783) by Giovanni Battista Cipriani for a price in the region of €425,000. It was one of its first deals of the preview day. The dealers also sold a pair of monumental marble lion groups attributed to Giovanni Battista Foggini (1652-1725) and his workshop to a new client, a private European collector. The pair was offered for a sum in the region of €1.75m.

Stephen Ongpin sold A Figure Standing in the Ruins of a House by Josephus Augustus Knip, a gouache and watercolour, to a European institution.

Rupert Maas sold a William Henry Millais watercolour titled On the Lyn, North Devon to a Dutch museum. It was priced at €10,000.