Ten outstanding dealer sales made in 2019: Part I

In our first of a two-part series, take a look at some of the most unusual and wonderful objects that dealers sold this year. Jorge Welsh Works of Art sold this Qianlong period export plaque to a museum during Fine Art Asia in October.

“This is the most important plaque of its kind, inspired by a French painting, and there was huge interest,” Welsh said after the event.

It shows a risqué scene of a nude being bathed by her female servant and would have been created for a Western buyer c.1780-90. In the past, these European subject wares have had limited appeal for Asian buyers, but this example, offered for a six-figure sum, sold to a museum in China.

The fair took place despite protests on the streets and a tumultuous political situation in the months leading up to it.

“Ironically this was my best fair yet in Hong Kong,” Welsh added. Offered at £1.35m, this oil on panel of The Tower of Babel, 1604 by Abel Grimmer, was sold by Johnny van Haeften at Frieze Masters.

Van Haeften offered the painting at Frieze Masters where it sold during the preview.

It shows the biblical structure pushing up through the clouds and is thought to have been inspired by paintings of Pieter Bruegel the elder, particularly his scene from 1563 now in the Kunsthistorisches Museum in Vienna. 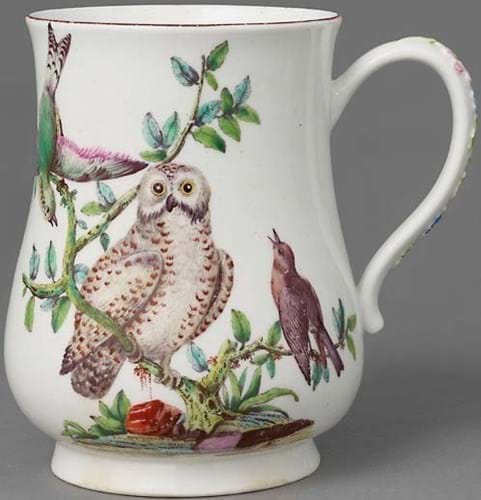 Chelsea Red Anchor period mug sold for a price in the region of £10,00 by Robyn Robb at the joint exhibition ‘A Collectors’ Paradise’.

Also taking place during the London summer season was A Collectors’ Paradise at The Brian Haughton Gallery. The show hosted Robyn Robb and Christophe Perlés at the St James’s shop.

Robb brought a selection of 18th century pieces including a rare Chelsea Red Anchor period mug, 5in (13.5cm) high, painted with an owl and other birds perched on branches. It sold during the event for a price in the region of £10,000. Unlike in France, where a strict guild corporation stamped and verified every piece of furniture, maker’s marks on English period pieces are a great rarity. Only six Coxed labels are known.

This is thought to be the earlier of two versions (dating from c.1711-15). Beneath a woodcut of a swan it reads: John Coxed At the Swan in St Pauls Church-Yard London, makes and sells Cabinets, Book-Cases, Chests of Drawers…

The 3ft 2in (96cm) high cabinet, from a private London collection, retains its original chased escutcheon and key. The japanning may be the work of fellow cabinetmaker John Belchier, whose work in St Paul’s Churchyard is recorded from 1717. 'The Private View at the Royal Academy, 1881' by William Powell Frith was sold to a private collector by St James’s dealer Martin Beisly. It had an asking price in the region of £10m.

Private View at the Royal Academy, 1881, the last panoramic painting by William Powell Frith (1819-1909) in private hands, sold with a price tag of around £10m. St James’s dealer Martin Beisly handled the sale on behalf of the family of Alfred Pope, the original owner. It sold to a private UK buyer.

Writers Oscar Wilde and Anthony Trollope, actress Ellen Terry, Prime Minister William Gladstone and artists Frederic Lord Leighton and John Everett Millais are among the eminent faces who are depicted surrounded by leading paintings of the day. These include Lawrence Alma-Tadema’s Sappho and Thomas Sidney Cooper ‘s The Scape-goat.

Beisly conducted extensive research on the picture for his sale catalogue with Frith experts Mark Bills and Rosie Jarvie. Among their findings is a letter from the artist responding to the owner’s request to paint out Wilde in light of the scandal surrounding his 1895 trial. He writes: “Would it not be well to wait the issue of the trial?”