Dealers in Mayfair, St James’s and Kensington Church Street use Asian Art in London as a chance to bring out their showstoppers in exhibitions at their home or temporary spaces. Here, ATG picks out some of those events in more detail.

Of the 22 galleries taking part in Asian Art in London, most are open each day during the event, including weekends. Many also take part in the late-night openings and the gallery hops – tours of up to 15 people will be taken to visit selected destinations on designated days. Whether a show is five years in the making or simply comprised of recent stand-out acquisitions, these exhibitions offer a huge array of objects from various periods and media. Simon Pilling’s exhibition includes is this ornamental box above, Gunyu (2017) by Yuji Okada, which is decorated by a swarm of dragonflies. It is offered for a price in the region of £15,000.

Animals have long provided motifs for prayers and wishes in Japanese art – the rooster, for example, embodies kindness and the frog good harvests. In Animals and Other Stories Simon Pilling explores the use of these and other creatures in historic and contemporary Japanese art.

Included is this ornamental box above, Gunyu (2017) by Yuji Okada, which is decorated by a swarm of dragonflies. These insects signify the end of summer and success in endeavours since the word for them, tombo, is a homophone for words associated with victory.

The box measures 5 x 5 x 4in (15 x 15 x 11.5cm), executed in platinum and gold makie and gold and shell inlays. Each wing is drawn out in black lacquer and platinum powders. It is offered for a price in the region of £15,000 at Pilling’s exhibition at Gallery 8 on Duke Street in St James’s. 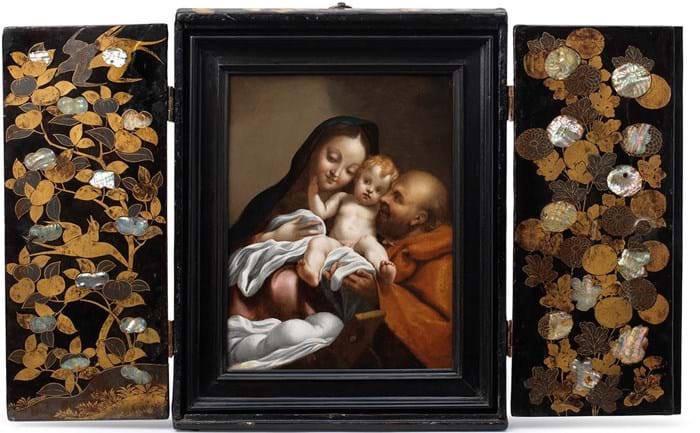 Jorge Welsh’s exhibition Turn of the Sea: Art from the Eastern Trade Routes offers more than 100 works of art resulting from cultural encounters between East and West at prices ranging from £2000 to more than £1m.

It includes a Japanese oratory from the Momoyama period (1573-1615). Made from Hinoki cypress, pine and ebony, it is lacquered in black with gold and silver paint and mother-of-pearl inlays and holds an interior oil on copper painting of the holy family.

The gallery, founded by Welsh and Luísa Vinhais, has locations in Kensington Church Street and Lisbon. The show will travel to the Portuguese premises after completing its run in London. Among the highlights at Rosemary Bandini is this guri lacquer plate, c.1800, measuring 8in (19.5cm), from the James Orange collection.

Japanese art specialist Rosemary Bandini offers a variety of netsuke, kiseruzutsu, lacquer and other works of art at her AAL exhibition, where pieces range in price from £1000-35,000.

Among the highlights is the guri lacquer plate (above), c.1800, measuring 8in (19.5cm), from the James Orange collection. Each lobe is carved to create a hollow that reveals progressive layers of lacquer of different pigments: red, black and ochre with striations of yellow and green.

The latter particularly stands out at the well of the dish. Of slightly lobed circular form, the unsigned plate stands on a low foot and is carved on the underside to resemble burl wood. Chinese perfumiere on offer from Jacqueline Simcox for £18,000.

Jacqueline Simcox specialises in silk textiles from China and central Asia, but one highlight she will show during AAL is a Chinese perfumiere. Gilt with inlaid turquoise, the piece measures 3in (9cm) and has yellow cords.

It is apparently unique – Simcox has been unable to find any other examples in her research – and it is possibly a tribute from Guangdong, a province known for sending finely worked art items to Beijing to the imperial court from c.1800. It is offered for £18,000.

Simcox also offers a rare group of brilliantly coloured late 19th century Chinese costumes as well as an assortment of earlier textiles. Though her gallery is based in Islington, she is staging her exhibition in Stoppenbach & Delestre’s space in St James’s. The highlight of Nick Pitcher’s exhibition is a pair of large glazed red pottery foreign tomb guardians from Liao Dynasty China (907-1125AD). They were sold as part of the estate of the late HD Salmon, who acquired them in the 1980s. Pitcher felt they were the most unusual and interesting part of the collection.

After buying them, he carried out thermoluminescence testing at Oxford (the certificate is included with the pieces) which confirmed that they date to the Liao Dynasty. Measuring 2ft (63cm) high, such pieces are rare. The only comparable examples known to the dealer are at the San Antonio Museum of Art in Texas.

Pitcher will feature oriental ceramics, bronzes and works of art in his New Bond Street gallery, where prices will range from £500-30,000. Among the earliest works on offer is a folio of the Hamzanama (shown above), a work commissioned by the young Emperor Akbar and attributed to the artist Mahesh. The piece depicts Gawhar Malik rescuing Gulrukhsar with the help of Khwaja ‘Umar and is executed in opaque pigments and gold on prepared cotton backed with paper. Calligraphy appears to the reverse.

Demonstrating the scope of the show’s timeline is a much later work, a 1933 photograph of a maharaja’s living room (also above). Sectional furniture with cabinets for records and a gramophone, a folding screen by Eckart Muthesius, a carpet signed by da Silva Bruhns and Constantin Brancusi’s Bird in Space are all visible in the vintage gelatin silver print.

It was taken by Eckart Muthesius, a German architect who designed the Manik Gabh, the modernist palace of Yeshwant Rao II Holkar, Maharaja of Indore. This katar or dagger from 17th century Tanjore (now Thanjavur), India, is exhibited by Runjeet Singh.

To mark the 20th anniversary of AAL, Runjeet Singh, specialist in Eastern arms and armour, is staging an ambitious exhibition to guide potential buyers through the variety of his offerings.

Iconic was designed in collaboration with architect Augustus Brown and is organised around a series of circular rooms set one within another. Each showcases one category of object starting with swords, then daggers, and finishing with works of art.

From the second section is a katar or dagger from 17th century Tanjore (now Thanjavur), India. Singh is based in Warwickshire but uses AAL as a chance to stage an annual gallery show in London.

Eskenazi will exhibit this pair of painted earthenware dogs from the mid-6th century, which are offered for a six-figure sum.

The Six Dynasties (220-581AD) represent a turbulent period in Chinese history when the country fragmented into rival kingdoms following the Han Dynasty. Nevertheless, art, poetry and religion flourished in this era, enriched by new ideas and materials entering the east through trade routes such as the Silk Road.

The art of this period is explored at Eskenazi in a show of 38 works from the collection of US film and television agent Norman Kurland. Glazed earthenware jars, bronze openwork plaques and terracotta tomb figures are all included. Dealer Giuseppi Eskenazi started working with Kurland in the 1980s to build up the collection but this is the first exhibition based solely on Six Dynasties art to take place at the Clifford Street gallery.

Among the highlights of the show is a pair of painted earthenware dogs (above) from the mid-6th century, which measure 10 and 8in (25 and 20cm) in length and are offered for a six-figure sum.