Prices show the US comic effect 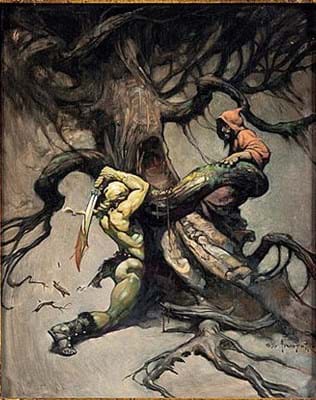 The creation of John Romita Sr, whose artwork for issues 39-95 had seen the character transformed from ”…a kind of nerdy high school kid to a more confident college student”, and Frank Giacoia, it was part of a Heritage Auctions (19.5% buyer’s premium) sale of February 22-24.

Signed, apparently at a later date, by Romita in the lower margin, it has at some stage been professionally cleaned, leading to some diffusion of the blue pencil lines. This led to the original condition report being amended from ‘Excellent’ to ‘Conserved Very Good’.

Not so far behind in price, at $360,000 (£257,140) was Frank Frazetta’s Tree of Death oil on board painting of 1970, which three years later was used as the cover art for a paperback, Flashing Swords #2. As the auctioneers helpfully and humorously explained, it features “…a sinewey barbarian rescuing a wizard from a horrific tree hell-bent on having a magical lunch!”

‘Bat-Man’, as he was originally called, had made his first appearance in Detective Comics in May 1939, and in a March 13-15 sale Hake’s Americana of York (PA) will offer a CGC 5.0 copy with a high estimate of $1m.

Collectors at the Heritage sale were also keen on cartoon strips and among them original artwork for two of Charles Schulz’s much-loved Peanuts strips. One of two, dated from 1953, were bid to $95,000 (£67,855) apiece in this sale.

Comics and comic artwork prices in the UK are by and large much, much more modest than those achieved in the US, and indeed France, but a March 1 sale held by Ewbank’s (27% buyer’s premium) enjoyed some success.

Most of the 40 odd lots offered were multiples of varying size but a copy of Marvel’s first X-Men comic of 1963 was sold at £1600.

This was a UK issue, priced at 9d, but in the recent Heritage sale, a 15 cent US issue was bid to $32,000 (£22,855). That one, formerly part of the legendary and complete Simi Valley Collection of Marvel comics, was sealed in its regulation CGC plastic box and carried a very high 8.5 (out of an effectively impossible perfect 10) rating.

Also illustrated here is a 1968 first of Ted Hughes’ tale of The Iron Man: a Children’s Story in Five Nights, illustrated by George Adamson.