Created to impress and instruct, textiles played an important role in the history of the Catholic Church. 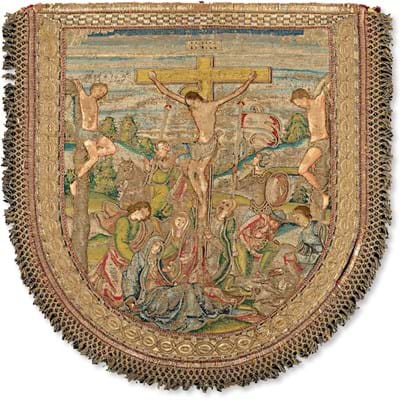 Many of those produced between the 16th and 19th centuries were the result of creative borrowing from other cultures and adaptation of secular styles but all were designed to send a message about the power of the church.

A selection of such lavish vestments is the focus of the exhibition Apparell’d in Celestial Light taking place at Indar Pasricha Fine Arts next month. Running from September 25-October 27 at the Pimlico gallery, it showcases a remarkable assemblage of rare and superb textiles.

Some of the textiles draw mainly on the European tradition, such as the hood of a cope made c.1570 for Philip II of Spain (it includes his Royal Coat of Arms) with embroidery which depicts a scene taken from an Old Master drawing or print by an unknown hand.

However, in many cases, this show demonstrates how designs often came from farther afield.

Gallery owner Indar Pasricha said: “There is a wonder that is captured in the textiles of Europe from the 16th to the 19th centuries. Textile design had brought together, in earlier manifestations, the influence of China, India and later those of Islamic Spain on the indigenous European aspects of pattern and colour. There were no barriers to borrowing from various cultures thrown together by the trade carried out between disparate traditions.”

One stand-out textile in the show is a pair of crimson velvet orphrey bands – long panels of decorative embroidery used to trim vestments – that feature a bold pattern of skulls and crossbones. Made in 16th century Spain, the embroidery lifts a motif from Latin American death culture including customs such as Mexico’s Day of the Dead.

There are examples similar to this in other Spanish designs. In 1604 a craftsman from Cordoba was commissioned to embroider a frontal for a church altar, one of which was of black velvet with skulls and crossbones embroidered in gold. A further example is four paraments (or hanging ornaments) owned by El Escorial, the royal palace outside Madrid.

In a completely difference style, the exhibition also includes a chasuble made c.1840-50, which features lotus flowers and was created for the Bishop of Macau.

The exhibition is in some ways a successor to the Victoria and Albert Museum’s Opus Anglicanum of 2016-17, though the focus of Pasricha’s exhibition is on textiles from later and different sources (Mayfair gallery Sam Fogg’s Late Medieval and Renaissance Textiles also had elements of these shows).

This year’s exhibition Heavenly Bodies at the Metropolitan Museum in New York examined the legacy of Catholic vestments in modern fashion. That narrative is inverted in this show, demonstrating how church garments were developed in response to external culture.

Chances to acquire such objects are rare. This collection was assembled by the gallery over more than 20 years and has drawn on collections in France, Spain, Italy, Austria, Germany and the US as well as the UK. Now the textiles are offered at prices ranging up to €1m.

Pasricha adds that some of the vestments “started life as clothes worn by aristocratic women and the peacock-like clothes of their men who then donated them to the church. The costly fabrics which were used were then redesigned to make spectacular vestments for the priests”.

Another focus of the exhibition is what Pasricha calls a ‘golden moment’ in European textile production, a period in which ‘bizarre’ design flourished.

These exotic asymmetrical designs, briefly dominated European centres of weaving (the period from 1690-1720).