Market freshness, provenance and attractive estimates were the features that held sway to ensure a high selling rate for a single-owner collection of British delftwares offered at Woolley & Wallis (25/12% buyer’s premium). Beginning in earnest in the 1960s and continuing into the ‘80s, this meant the Warners were buying when a number of major collections in this field were being dispersed.

As a result they were able to secure pieces from some of the landmark auctions of the time: those of Louis L Lipski, FH Garner and Sir Gilbert Mellor.

W&W specialist Clare Durham reckoned that for those collectors who remember – or even attended – some of these events, the sale represented a first chance to acquire these pieces since they entered into the Warner collection.

Pottery collectors and specialist dealers made up the bulk of the buying pool: people who understood the nature of tinglaze earthenwares and were not put off by the inevitable chips, cracks and repairs associated with what is a relatively fragile medium.

It also had helped that the auction house had, in Lady Warner, what Durham described as “a very relaxed vendor” allowing them to let the market find its level.

As those who have followed this sector closely know only too well, price levels have adjusted significantly since the big buyers such as Simon Sainsbury and Sydney Levethan were spending record-breaking sums on delftware.

And Durham felt that by and large the sale went as expected: “The casualties were the more ordinary plates. The rarest pieces were the ones that took off.”

Those rarest high-flyers included a glass-bottomed mug and some of the large chargers. 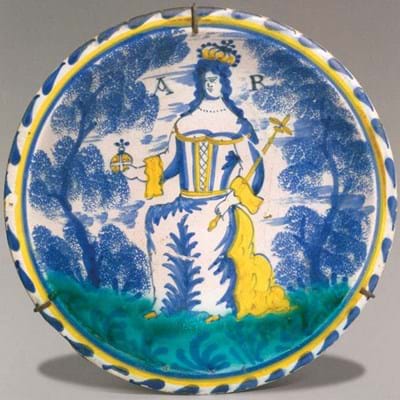 Also worth noting was the demand for the more sculptural three-dimensional pieces: flower bricks, posset pots and drug jars. Interest in the latter was deemed particularly encouraging by Durham who felt that, after having been flat for a while, demand seems to have risen in the last year.

On the other hand, with lots containing several classic 18th century delft plates going for as little as £100-160 or groups of painted tiles in the £80-160 bracket, there was also scope for entry-level collectors among the more standard material.

Topping the sale, as expected, was one of the earliest lots: a 19¾in (50cm) wide oval fecundity dish dated 1638 and initialled IN.

It was moulded with a central scene of a reclining naked figure of Venus with five putti. The decoration derived from the pieces produced in the previous century by the French potter Bernard Palissy, being one of subjects that he modelled in high relief in his repertoire of mythological, allegorical, fauna and floral designs. The most expensive piece in the Warner collection auction held at Woolley & Wallis was this 'Fecundity' dish dated 1638 which sold for £17,000.

The plate was acquired by Sir Frederick at Christie’s in June 1975 for 500 guineas. This time around it realised £17,000. Although well over the £8000-12,000 guide, Durham had hoped it might make as much as £20,000 but, talking after the sale, she felt the degree of restoration may have counted against it as well as, perhaps, the more European taste of the decoration.

By contrast plenty of demand emerged for the four tulip chargers in the Warner sale, each of which exceeded estimates and here perhaps their very decorative nature may have served to broaden the appeal beyond the sphere of the specialist delft collector and dealer.