More reliable today than they ever were in their lifetime, the male line of the Stuarts attracted the familiar devoted following at the annual Scottish Silver & Applied Arts sale at Lyon & Turnbull (25% buyer’s premium). UK collectors beat off the trade and overseas competition for the better Jacobite trophies at the August 14 sale in Edinburgh, including a gold-mounted ring enclosing a lock of Prince Charles Stuart’s hair.

Engraved Mèche de cheveux de Prince Charles Edward Stuart 1744, it was by no means the first such keepsake of the Young Pretender to appear at auction but it was unusual being dated before the fateful campaign got under way. It appears that the ring was given to a supporter while Bonnie Prince Charlie was at Dunkirk, before sailing to Scotland to raise the clans for the rising of ’45. Also going well above hopes was a well-preserved mid-18th century enamel snuff box with a hidden portrait of Charles. These examples of sub-rosa loyalty to the Stuart cause come in differing forms. This c.1750, 2¾in (7cm) diameter box with tartan enamel to the exterior opened to reveal a plain interior but the hinged double lid enclosed a finely enamelled miniature. Three years ago at the equivalent L&T sale, a similar snuff box, with a pasted engraved print on the interior of lid, took £10,000. This latest example trebled the mid-estimate at £7500.

Charles’ father, the Old Pretender King James III/VIII of England and Scotland, is a less romantic figure than the Young Chevalier but a double portrait ivory miniature of James and his wife, Princess Maria Clementina, came with a remarkable provenance.

It had been in the Creyke family of Yorkshire – landed gentry who were loyal to the Stuarts since the civil war – for nearly three centuries before being sold to a private collector at Lawrences of Crewkerne in October 2010. Offered at Edinburgh, it doubled the lower estimate in selling at £6000.

James was also the subject of the best-seller among 31 Jacobite wine glasses displaying semi-secret signals of support for the exiled Stuarts. Demand for these surged across Britain from as early as the 1820s and their popularity inevitably led to fakes. As 18th century glasses were used as the canvas for later engraved Jacobite symbols, distinguishing the finest from the faux requires considerable expertise. 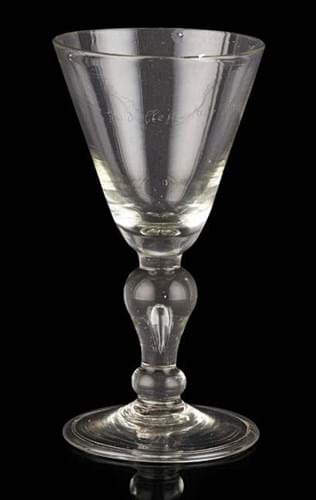 There was no doubting the authenticity of the top L&T example, an 8in (20cm) tall goblet from the late Michael Buckingham Collection.

This method is seen on the famous ‘Amen Glasses’ c.1740-50 – one of which took £43,000 at Halls of Shrewsbury seven years ago – but it is unusual on Stuart glass, the few surviving examples of which all date from the early 17th century. This example took a mid-estimate £3600.